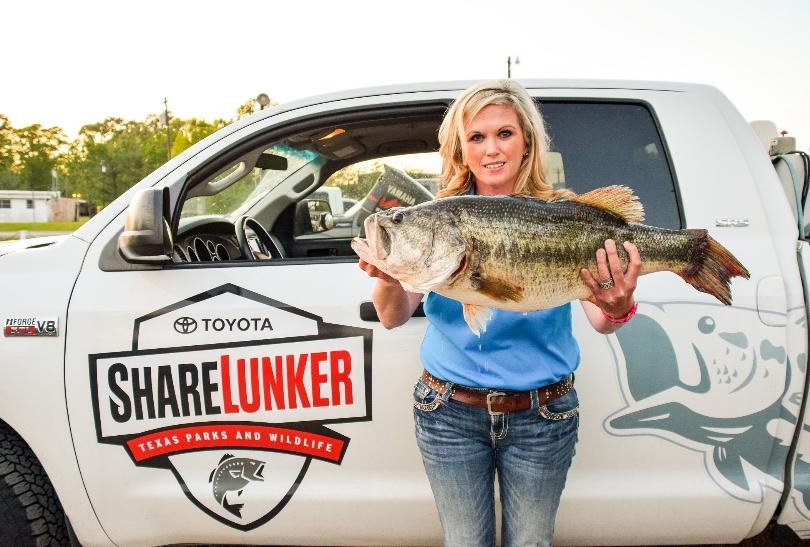 “When I set the hook I knew it was a big fish – but I didn’t know how big,” Spriggs said. “It never crossed my mind that it was a ShareLunker until we got to the [tournament] scale. When they put her on the scale and she weighed over 13 pounds I was shocked. This is way bigger than anything I’ve ever caught before.”

An avid tournament angler, Spriggs said her previous biggest fish was a 9.71 pound bass caught in another tournament the weekend before. Spriggs said ShareLunker 576 meets a goal she set since she began fishing nearly 8 years ago – to catch a double digit bass at her home lake.

“We have a lakehouse on Sam Rayburn and fish the lake 90 percent of the time,” Spriggs said. “Neither my boyfriend or I had ever caught a double digit on Sam Rayburn. I did it by three pounds – it was pretty crazy.”

Once Toyota ShareLunker program coordinator Kyle Brookshear arrived at the Sam Rayburn Lakeview marina to inspect the fish, he decided it was in the best interest of the fish’s health to return it to the lake instead of bringing it back to the Texas Freshwater Fisheries Center in Athens to attempt spawning. Although she will not be a part of the selective breeding program, the fish is classified as a Legacy Class entry and now bears the title ShareLunker 576.

Every angler who loaned a 13 pound or larger Legacy Class bass to the Toyota ShareLunker program during the spawning period Jan. 1 to March 31 will receive a Toyota ShareLunker Catch Kit containing branded merchandise and fishing tackle items, a 13lb+ Legacy decal, VIP access to awards programming at the Toyota Bassmaster Texas Fest, a replica of their fish, and an entry into the year-end ShareLunker Prize Drawing to win a $5,000 shopping spree and an annual fishing license. These anglers will also be entered into the Legacy Class Prize Drawing for a $5,000 shopping spree and an annual fishing license at the end of the spawning period. TPWD will officially announce the drawing winner at the Toyota Bassmaster Texas Fest during the ShareLunker awards ceremony on May 19th.

Although the Legacy Class donation season has ended, anglers can still enter their 8 pound or larger largemouth bass catches into the Toyota ShareLunker program through Dec. 31. Entries can be made online or through a free app available to download from the Apple App Store and Google Play.

Each angler who enters an 8 pound or 24 inches and larger lunker bass on the mobile app or website will receive a Toyota ShareLunker Catch Kit containing branded merchandise and fishing tackle items and an entry into the year-end ShareLunker Prize Drawing for a $5,000 shopping spree and an annual fishing license. Anglers will also receive a vehicle decal to display their recognition category – Lunker Class for bass at least 8 pounds or 24 inches, Lunker Elite Class for bass 10 to 12.99 pounds, and Lunker Legend Class for bass at least 13 pounds.

For updates on the Toyota ShareLunker program and to view photos of all of the 13-pound-plus largemouth bass caught this season, visit https://www.facebook.com/ShareLunkerprogram or https://texassharelunker.com/.