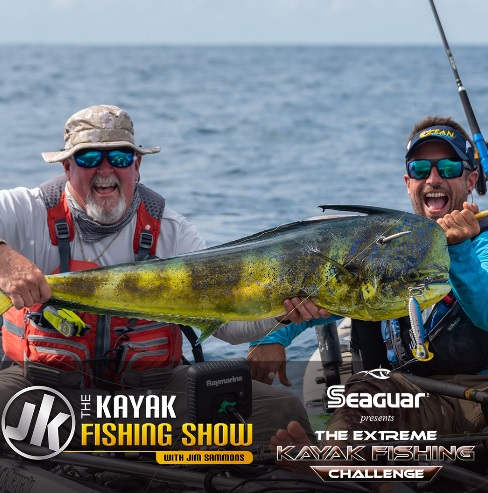 The two shows follow host Jim Sammons as he travels the world with his kayak, on the hunt for the biggest and most challenging game fish. A San Diego, California native and certified fish and game licensed guide, Jim is known worldwide as a pioneer of big game kayak fishing. This season, Jim targets huge gamefish in the Bahamas, Louisiana, Canada’s Algonquin Park and the Ottawa Valley, Panama, Sweden, Costa Rica, California, Brazil, and Florida.

“This past year of filming has been super exciting!” explains Jim. “We traveled to some amazing locations, met so many wonderful people and experienced their food and culture. We fought some pretty stubborn fish and had a number of truly memorable moments on the water. I know the viewers at home will get a kick out of each episode.”

As for Jackson Kayak’s Kayak Fishing Show, this season kicks off with Jim and special guests from the Jackson Kayak Fishing Team chasing down various species of fish on the fly in the clear blue water of Bahama Island. Without giving too much away, viewers will get to witness the kayak anglers fight with more than eight different species of fish including: tarpon, permit, bonefish, wahoo, ski jacks and barracuda.

Those interested to learn more about the two series can do so at www.kayakfishingshow.com. Fans can also catch more kayak angling entertainment with Jim Sammons by tuning in to the Kayak Fishing Tales WebTV YouTube channel.

About Heliconia: Heliconia is an award-winning video production company that specializes in outdoor productions. For 22 years Heliconia has helped industry-leading brands, and some of the world’s top tourism authorities, communicate their marketing message in a unique, and inspiring way. Heliconia offers custom video production services and produces seven unique television series which air on such networks as Sportsman Channel, FOX Sports, Outside TV, Nautical Channel, and World Fishing Network. Heliconia is also a leader in online video productions, with over 264,000 YouTube subscribers and 64,900 million views. See all of Heliconia’s work at www.helipress.com.