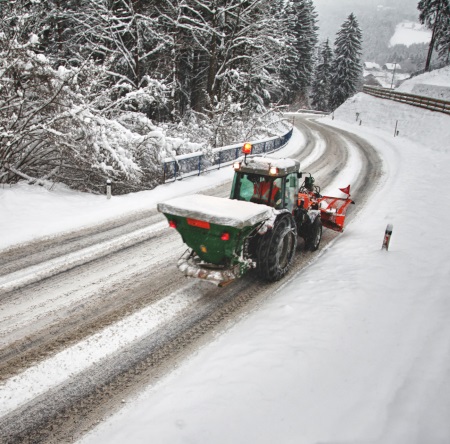 As the days shorten and get colder, our thoughts shift from outdoor activities to spending time indoors with friends and family. When it’s time to snuggle up by the fire, many of us might think it’s also time to put stream monitoring and the Clean Water Challenge on hold until spring. But there is still work to be done, even when the temperature drops.

Although we typically suggest biological stream monitoring (finding macroinvertebrates) in the fall and spring, we should not forget about water quality during the summer and winter months. Each season presents specific threats to stream health. In winter, road salt can cause serious damage to water quality. That’s why the League created the Winter Salt Watch campaign – to help volunteers like you measure salt (sodium chloride) levels in local streams and alert local agencies when they spot a problem.

How exactly does road salt work – and how did we get to using up to 20 million tons of it every year?

Road salt was first used in New Hampshire in 1941 – and its use quickly snowballed. As automobile accidents decreased in New Hampshire, other snow-covered states took notice and began using road salt. In the 1950s, the U.S. highway system began a rapid expansion, and the increased mileage of roadways required even more road salt. It wasn’t until the 1970s that Americans began to realize the harmful effects of road salt on nearby lands and waters. Cities began to be more mindful of salt usage, but ultimately we were hooked and there was no easy alternative. Over the past two decades, some cities have looked into using salt alternatives, but other de-icers have failed to gain traction due to cost concerns.

Today, we use 10 to 20 million tons of road salt every year, depending on the length and severity of winter weather. The majority of the road salt we use comes from salt mines across the country (the same salt that is ground up for use on your dinner table). It is difficult to know when these salt supplies will run out, but it is certainly much cheaper to use domestic salt – on both our roads and our tables – than to import it from other major salt producers such as China.

The Science of Salt

Salt has the ability to both raise the boiling point of water and lower its freezing point. Fresh water will freeze at 32 degrees Fahrenheit. Salt water will resist freezing to about 15 degrees Fahrenheit. However, road salt does not start working until it has dissolved into a liquid, so new technologies include applying a salt solution or pre-wetted salt to allow it to start working immediately.

Other elements, such as calcium chloride, can drop the freezing point of water much lower than 15 degrees. However, they are typically not used on roadways because they cost twice as much as rock salt.

When road salt is used to melt ice, it eventually runs off into the soil near the road. When winter is over, spring rains flush this salt into our streams, rivers, and lakes. This is a slow process. Even if we quit using road salt today, the salt already in the ground can persist for decades, and the salt content in our streams will rise as salt continues to percolate through the soil.

I frequently used chloride test strips with children during Creek Freaks stream monitoring events. After the kids figured out that chloride gets in the water through salt (sodium chloride), they sometimes asked if that is normal or if the fish can just live with salty water like they do in the ocean. Unfortunately, most freshwater fish cannot adapt to salt in the water. Salt can also be harmful to the aquatic macroinvertebrates that we look for during stream monitoring – these freshwater bugs can only tolerate so much salt before the stream becomes uninhabitable.

The Cost to You

We all know that fast food and convenience munchies are often laden with salt. But did you know that we use more than 10 times the amount of salt on our roads than is used in all American food processing each year? Doctors have become increasingly concerned that as road salt infiltrates our drinking water supplies, it can cause problems for people with high blood pressure because water treatment plants cannot remove all the extra sodium.

Road salt can hurt your wallet too. Rust damage due to road salt can shorten the life of your car (and drop the resale value). Road salt and its application cost the U.S. some $2.3 billion a year – much of that paid through your tax dollars! One study in Ohio found that the state uses 176 pounds of road salt per person each year.

Traveling safely is important to us all. However, we need to ensure efforts to keep our roads safe do not destroy water quality in the process.

It’s easy to check how much salt is in your local stream using chloride test strips, which provide an instant reading – and you can get a FREE chloride test kit from the Izaak Walton League! Sign up for your free kit and start collecting data now to get a long-term look at chloride levels and the health of your local streams.