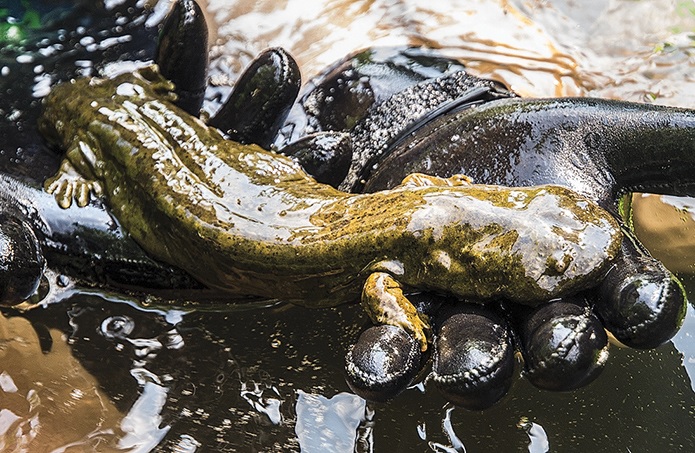 The imperiled eastern hellbender, a creature most people consider ugly and few Pennsylvanians have ever seen, became the state’s official amphibian April 23, with the stroke of a pen from Gov. Tom Wolf.

It was a crisscrossed journey — the nomination of another salamander briefly challenged the designation — but the persistence of a high school environmental group and other few but loyal fans of North America’s largest salamander succeeded in the end.

A fully aquatic salamander with slimy, wrinkled skin, the hellbender can grow up to 2 feet long and goes by an unflattering array of nicknames such as devil dog, mud devil, snot otter and Old Lasagna Sides.

It is not aesthetically pleasing or universally cherished like other Pennsylvania official emblems, such as ruffed grouse, brook trout, Pennsylvania firefly, white-tailed deer or mountain laurel. The new state amphibian is actually one of the least-known creatures in the state.

But supporters say it serves as a symbol for something valued both by Pennsylvania citizens and those downstream near the Chesapeake Bay: clean, clear water.

Hellbenders survive only in clean, well-oxygenated and fast-flowing streams. They also need streams with plenty of boulders to hide under and snatch prey, which consists almost entirely of crayfish with an occasional minnow or trout egg that they find more by smell than clumsy sight.

“Yes, it’s an ugly creature that serves a beautiful purpose,” state Sen. Gene Yaw said on the floor of the capitol in Harrisburg in February when he appealed to fellow legislators to recognize hellbenders.

“It’s an excellent natural indicator of good water quality. It exemplifies what is good about Pennsylvania’s waterways.”

Yaw decided to push for state status after being approached by Anna Pauletta, of Mechanicsburg, PA, then a high school student and president of the Chesapeake Bay Foundation’s Student Leadership Council in Pennsylvania.

“It’s not the most attractive, but it’s something that’s very important to the food and balance of our waterways.

It’s an indicator species,” Pauletta said. “It’s such a universal need. Everybody relies on clean water.”

Dr. Peter Petokas, a biology professor at Lycoming College in Pennsylvania who keeps tabs on hellbenders and fights to save them, adds, “They are kind of a canary in the coal mine.”

Eastern hellbenders, which live up to 50 years, have been around for tens of thousands of years and are the largest amphibians in the world aside from a 4-foot-long species in Asia, which is their closest relative.

They are secretive, live most of their lives under a single boulder or two, and only come out at night to feed. Few people have ever seen them, though anglers fishing with bait occasionally are startled to find one at the end of their lines.

Eastern hellbenders once inhabited rivers and tributaries up and down the Appalachians, from New York to Georgia. But they have disappeared from most of their range in recent decades because of pollution, sedimentation, illegal collection, acid mine drainage, dams and more recently, a fungus.

In Pennsylvania, Petokas and his students have found viable populations remaining in only four mountain tributaries of the Susquehanna.

Countering the eastern hellbenders’ rise to recognition in Pennsylvania, the U.S. Department of the Interior in April declined to list the species as threatened under the Endangered Species Act after eight years of consideration. The Center for Biological Diversity characterized the decision as “a big shove toward extinction.”

But there are some encouraging signs on the conservation front. Last August, 100 adult hellbenders raised in captivity at the Bronx Zoo from eggs collected by Petokas in Pennsylvania and New York were released into a tributary of the Susquehanna in southern New York. The Wildlife Conservation Society paid for the project, which is working on a second batch for release.

And a new high-tech tool called Environmental DNA allows water samples collected from streams to identify the presence of different species. The data is identifying hellbenders in some new streams, according to Brandon Ruhe, president of the Pennsylvania-based Mid-Atlantic Center for Herpetology and Conservation.

Ruhe says the group is also getting promising reports from anglers who accidentally hook hellbenders, some in streams where hellbenders had not been documented.

“I think maybe we should take a deep breath. Maybe they are doing a little better than we thought,” Ruhe said.

About Ad Crable a staff writer for the Bay Journal based in Lancaster County, PA.
print