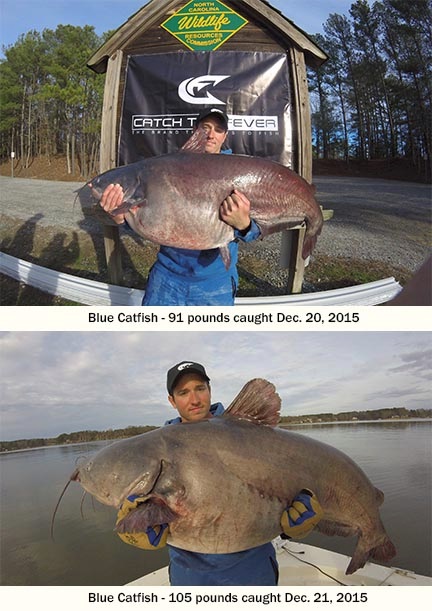 For the third time in six months, Lake Gaston has produced another blue catfish state record. The holder this time is 15-year-old Landon Evans, of Benson, who landed a 117-pound, 8-ounce whopper on June 11. Evans caught the fish, which measured 55 inches in length and 40½ inches in girth, using cut shad as bait.

The N.C. Wildlife Resources Commission confirmed the new state record after the fish was weighed on certified scales at Ace Hardware in Littleton and examined and identified by District 3 Assistant Fisheries Biologist Evan Cartabiano.

To qualify for a N.C. Freshwater Fish State Record, anglers must have caught the fish by rod and reel or cane pole, have the fish weighed on a scale certified by the N.C. Department of Agriculture, witnessed by one observer, have the fish identified by a fisheries biologist from the Commission, and submit an application with a full, side-view photo of the fish.

For anglers who catch a blue catfish that doesn’t quite measure up to this latest record-breaker but is 41 inches or longer or weighs 30 pounds or more, the Commission offers a blue catfish classification for its North Carolina Angler Recognition Program<http://www.ncwildlife.org/Fishing/FishingRecords/NCAnglerRecognitionProgramNCARP.aspx>. NCARP officially recognizes anglers who catch trophy-sized freshwater fish that do not qualify for a state record with a certificate featuring color reproductions of fish artwork by renowned wildlife artist and former Commission fisheries biologist Duane Raver.

For a list of all freshwater fish state records in North Carolina or more information on the State Record Fish Program, click here<http://www.ncwildlife.org/Fishing/FishingRecords/ApplyforaNorthCarolinaStateFreshwaterFishin.aspx>. For more information on fishing in public, inland waters, www.ncwildlife.org/fishing or call the Inland Fisheries Division, (919) 707-0220.