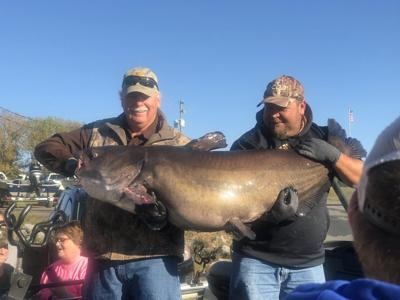 There is a new new record for the largest blue catfish in Kentucky.According to the Western Kentucky Fisheries Facebook page, officials verified that Glynn Grogan of Arlington, Ky. caught a 106.9 pound blue catfish on Saturday, Oct. 20.

This reportedly sets a new record for the state.

In the video posted on Facebook, Grogan says he was participating in the Walter Hayes Memorial Catfish Tournament and caught the big fish Below Olmsted in the Ohio River by using a mooneye. According to Wikipedia, mooneye is a ray-finned fish which looks similar to shads.

Grogan says he and Hayes were long time fishing partners until his passing last year.

After the giant fish was verified, the Facebook video shows it was released back into the river.