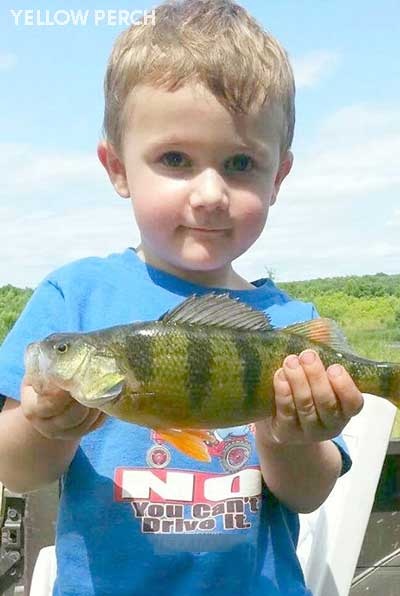 Perch fishing does not require a wide or expensive collection of fishing gear. Most anglers use basic rod-reel combinations, although light tackle is the most popular. Use a somewhat stiffer 6 to 6 1/2 foot rod with a medium to fast tip for trolling or drift fishing. Lighter 5 1/2 to 7 foot rods work best for jig fishing or casting.

Perch are notorious bait robbers; a fast action rod tip works well to notice subtle bites. Fly rods remain the mainstay of some perch anglers, although their popularity has declined with the use of light spinning and spin-casting rods.

Reels, like rods, come in many styles, brands and sizes. Choose the one that best fits your needs. Open and closed-face spinning reels, in ultra-light or medium sizes are used the most. If you like to cast small lures, choose a higher quality and more durable reel.

Monofilament line works best for perch fishing. Use the lightest line possible for the type of fishing you are doing. Lighter lines allow for the sensitive touch or feel, which is useful when perch bite softly. Use 4 to 8 pound-test line, depending upon lure size, for trolling or drift fishing. For still fishing or casting, 4 to 6 pound-test line is favored and 2 pound-test line is the choice for the smallest lures.

Bobbers or slip-bobbers help keep the bait in the proper position when fishing in or around submerged vegetation or while dock or shore fishing. Perch are known for their ability to strip bait from a hook without pulling the bobber under or otherwise indicating there is a bite, so a small bobber is recommended.

Artificial lures used for perch include many of the same types used for other panfish. Small lures are best because perch have small mouths and show little interest in a lure that is too large.

One of the most popular types is a lead-head. Made in many sizes and colors, the one sixty-fourth and one thirty-second ounce sizes are most popular. Lead-heads have a number of different names, depending upon if they are tied with feathers, hair, skirted with a plastic lure or chenille wrapped. The skirted lead-head, often called a mini-jig, is one of the most effective. Skirts for lead-heads are made of soft plastic and threaded directly through the hook, so the hook shank is completely covered. Yellow, white, and a combination of yellow-white skirts work best in our natural lakes. Perch can be very specific about which lure they strike, and at almost any time might choose a lure with a red-white, purple, green, or some other colored skirt.

Heavier lead-heads up to one-eighth ounce are best for trolling or drift fishing, although slip-sinker lures or a small spinner rig are becoming more common. Floating jig heads are excellent lures either with a slip-sinker rig or with a fixed sinker or three-way bottom walker set-up. A floating lure setup lets you suspend the lure at different distances above the bottom, so it will not snag on rocks or vegetation as easily.

Use small, metal jigging spoons, one thirty-second through one-eighth ounce size, during autumn and throughout the winter. Replace the treble hook with a single, 6 or 8 sized long or short shanked hook for easy baiting and handling of fish. A simple way to change to a single hook is to cut two barbs from the treble hook. Drop hooks, made by tying a short piece of line between the hook and lure on these spoons, can sometimes help trigger bites. Lures are usually tied directly to the line, except when using slip-sinkers or bottom-walkers since the goal is to present the “right” size bait to the perch.

Live bait is a stand-by for perch fishing. Small minnows and insect larvae work well year-round. Minnows are the favorite bait for trolling or drift fishing with spinner rigs and three-way rigs using lead-heads or other jig heads. Small minnows also work well when still fishing in late autumn and winter. Nightcrawlers and small worms, although not as popular with anglers as minnows, are also effective at times while drift fishing or trolling. They are usually rigged with a stinger or trailer hook. Insect larvae, mainly silver wigglers or maggots, are the most widely used bait for perch in natural lakes.

Wax worms, mousees and many grubs are also used during certain times. These baits have long shelf life compared to wigglers, which must be stored where it is cool. Crayfish meat is an excellent perch bait, particularly during the mid- and late summer months. Split the tail and roll the flesh out with the thumb to remove the meat.

Perch feed by sight and need light to find prey. They start foraging only after sunlight enters the water depths. They may eat off and on throughout the day, but usually eat once in the morning and once in the afternoon. As night approaches the schools scatter and the fish are lazy until the next morning. Perch are rarely caught at night.

The best time of day to catch perch can change suddenly on any day. Perch fishing is usually best in the early morning or evening hours during late spring and early summer and late afternoon or evening in late summer. In autumn, both morning and late afternoon-evening provide excellent fishing.

In the natural lakes, the best fishing is usually from late summer until late fall. Late spring and early summer rank as average; an angler that can consistently catch perch in mid-summer can catch fish at any time.

Perch are found mostly in deeper water during much of the year, so they are hard to find without a boat. A boat provides an easy way to seek out fish by trying different locations.

Shore or dock fishing is good at times, particularly during spring and early summer. Perch gather around bottom structures, such as rock piles, reefs, along the lee side of land points, beds of submergent aquatic plants and bottom drop-offs. In late spring and early summer they are often found in 10 to 20 feet deep water, still near the bottom. Drift or troll until you find a school, then anchor and still fish or cast.

No matter what type of lure, bait or gear you use, success is often dependent on how well the bait is presented to the fish. Perch orient toward the bottom, so your bait or lure must be fished on or near the bottom. When perch are found, fishing may be slow at first, but most often action is fast and furious as schools of perch move through while feeding. Land each fish as quickly as possible and put the bait back down, because the next perch is waiting to strike. A strike may occur as the bait drops, but most often it happens just as the bait is lifted off the bottom – so be ready.

When fishing is slow, vary your techniques before moving to another spot. If jigging produced good fishing then suddenly slows, cast in a circle around the boat. Let the bait hit bottom before reeling it in. If a strike occurs, land the fish slowly. The flashing action of the fighting fish seems to draw other perch back into the area. As action increases, land fish faster and get the bait back down.

Swishing a rod back and forth in shallow water will often attract perch and trigger some bites. Running the boat motor, even while anchored, also can have some positive results with the noise appearing to entice perch. Some anglers pound their anchor up and down in the lake bottom before anchoring to attract perch. If there’s still no action after 15 or 20 minutes, move to a different spot and try again. Perch usually need no invitation to bite and once found they will provide lots of fast action like few other fish.

Perch – Where to Find Them

Perch can be found throughout Iowa, although the largest populations are in the natural lakes and northern parts of the Mississippi River. The best perch fishing is in Iowa’s larger natural lakes and Mississippi River backwaters. An additional number of smaller natural lakes, especially those with recent restoration projects, can provide excellent perch fishing. Some man-made lakes have abundant perch populations, but they are usually too small to hold much interest for anglers.

Use a topographic map to find likely fishing places. These are available on the Iowa DNR website, many GPS/sonar combination systems with lake map software, smartphone apps, and on paper in many local bait shops and fishing tackle stores. Look for places where bottom contours change and there is plenty of underwater structure. Watch for large groups of fishing boats – a sure sign of excellent fishing.

The mid-summer time in most lakes finds perch in the outside edge or pockets of submergent vegetation in 10 to 15 feet of water. An exception is in the deeper lakes that stratify, like West Lake Okoboji, where larger perch like cooler water layers at a depth where the thermocline  (a thermal water temperature barrier that forms in deeper lakes in the summer) intercepts the bottom, usually at 30 to 40 feet. A topographic map or electronic depth finder is helpful at this time.

As autumn progresses, perch are again found in 10 to 20 feet of water and are most often seen around some type of bottom structure. The major exception is in the deeper lakes that stratify, like West Okoboji Lake, where perch move into the deeper and warmer water layers. It is common to find perch in 40 to 50 feet of water in this lake during late fall. Perch stay in the deeper water in winter. But in contrast to the other seasons, perch are found many times over the large, featureless sand and silt flats in mid-lake.