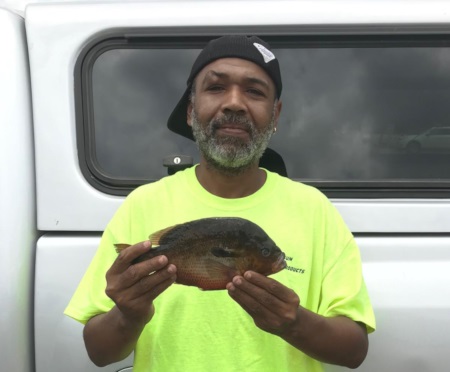 Jackson, who is from Maxton, caught the sunfish using a cricket as bait. His catch breaks the previous record by 5 ounces. That fish, which weighed 1 pound, 12 ounces, was caught on May 29, 1983 by Ronald Stanley in Big Swamp in Bladen County.

Jackson, 43, is an avid fisherman, a passion he attributes to his father Johnny Jacobs who taught him how to fish when he was a small boy, and one that he has passed on to his children, ages 23, 18 and 17. They were with him the day he caught the massive sunfish.

“We started fishing in a pond but weren’t having any luck, so I said to my kids, ‘Let’s go back to where I learned how to fish’ and this is what we caught,” Jackson said. “I’d like to thank my daddy for teaching me how to catch fish and where to catch fish.”

Jackson had the fish weighed on certified scales at Safeway Market in Maxton.

To qualify for a N.C. Freshwater Fish State Record, anglers must have caught the fish by rod and reel or cane pole; have the fish weighed on a scale certified by the N.C. Department of Agriculture, witnessed by one observer; have the fish identified by a fisheries biologist from the Commission; and submit an application with a full, side-view photo of the fish.

For anglers who catch a redbreast sunfish that doesn’t quite measure up to this latest record-breaker but is 11 inches or longer or weighs 1 pound or more, the Commission has a redbreast classification for its North Carolina Angler Recognition Program<https://www.ncwildlife.org/Fishing/Fishing-Records/NC-Angler-Recognition-Program-NCARP>. NCARP officially recognizes anglers who catch trophy-sized freshwater fish that do not qualify for a state record with a certificate featuring color reproductions of fish artwork by renowned wildlife artist and former Commission fisheries biologist Duane Raver.

For a list of all freshwater fish state records in North Carolina or more information on the State Record Fish Program, visit the Commission’s State Record Fish program webpage<https://www.ncwildlife.org/Fishing/Fishing-Records/NC-Freshwater-Fishing-State-Record-Program>.