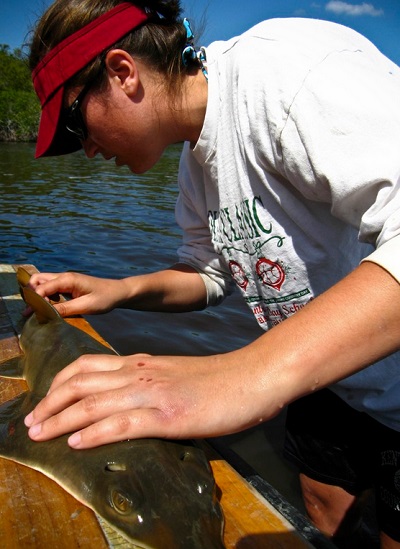 The smalltooth sawfish (Pristis pectinata) once roamed throughout the Gulf of Mexico and along the East Coast, but now calls South Florida, particularly Everglades National Park, home. Smalltooth sawfish were protected under the Endangered Species Act in 2003. Their population declines were mainly driven by bycatch mortality, accidental capture in fishing gear resulting in death, and habitat loss. Sawfish were also harvested extensively as trophies due to their unique rostrum, the long saw that extends from its face like a spikey nose. It is not unusual to see a sawfish rostrum hanging on the wall of a bar in Florida, just as you might expect to see a set of deer antlers on the wall of a bar in Wisconsin. Essentially, sawfish could not keep up with the harvest mortality and habitat loss. Now, one of the last remaining strongholds for young smalltooth sawfish is Everglades National Park in Florida.

You might be wondering how a fish that lives in the ocean could lose its habitat when the ocean is so vast. Well, like many other coastal fish, smalltooth sawfish use nursery areas when they are first born. Nursery areas are often estuaries, with lots of available food and shallow waters for refuge from predators. Coastal development can alter or remove the habitat that is essential for nurseries. In the case of smalltooth sawfish, they appear to prefer tidal flats along mangrove-lined coasts. Development in South Florida has lead to significant losses of mangrove-lined coasts, but Everglades National Park has helped to preserve a large portion of these mangroves. In this last remaining refuge, researchers at Florida State University and NOAA wanted to better understand the environmental factors that are important for sawfish habitat selection in the Everglades.

Dr. Lisa Hollensead and her collaborators set out to the northernmost portion of Everglades National Park to answer questions about how long young sawfish remained in this nursery area and what habitat characteristics were most important to them. To do this she used acoustic telemetry which involves a combination of tagged fish and anchored receivers. These receivers record the date, time, and tag number when a tagged fish swims by them, allowing researchers to track the movements of tagged individuals as they go from one receiver to the next. To better understand what factors influenced where sawfish spent their time, Lisa quantified several different habitat factors near her anchored acoustic telemetry receivers. Along the shore closest to the receiver, she counted the number of red mangrove prop roots, measured the tree limb overhang that extended out into the water, and took sediment samples.

During the study the team captured and tagged 21 sawfish in Northern Everglades National Park. They heard from them in their acoustic receiver array for as many as 334 days. Sawfish tagged in Chokoloskee Bay remained there for the entire length of the study, spending the winter in the area where they were tagged the previous spring. This was the first time that sawfish were documented to remain year-round in Everglades National Park, emphasizing the importance of the area to their continued survival!

Analyses of habitat use and movement found that sawfish moved quickly through creeks and rivers, but remained much longer in tidal bays. Researchers have several theories about why this is. Because sawfish are mostly flat, like a stingray, as opposed to rounded like a shark, the best way that they can avoid predators is to move into shallow water where sharks cannot fit. The tidal bays likely provide better protection while still having sufficient food than a faster flowing, deeper river. Analysis of other habitat factors showed that sawfish were more likely to be encountered in areas with more mangrove prop roots, and the sediment was almost exclusively fine silt. This makes sense since the sawfish are using the tangle of mangrove prop roots in shallow water as protection from predators. More roots could mean more protection.

While many questions remain, the importance of the Everglades and its many mangroves to sawfish is clear. When asked about the importance of Everglades National Park to sawfish conservation, Dr. Hollensead notes, “The Everglades National Park gives researchers a perspective of juvenile habitat use in a relatively pristine area. Generally, large portions of the Everglades are not developed (unlike much of the rest of south Florida) and the hydrology is not directly manipulated through anthropogenic influences, like dams, within the park. Results from habitat studies in the Everglades can be compared, almost like an experimental “control”, to habitat use results from more developed areas within their range. These comparisons can help scientists effectively implement management strategies for sawfish conservation.”

You can read more at https://oceanbites.org/saving-sawfish-adventures-in-the-everglades/ or the full results of this important research at https://www.int-res.com/abstracts/esr/v37/p119-131/

Tax-deductible donations to help us continue our mission to promote the sustainable use and conservation of marine resources through research, outreach, and education can be made at https://www.oceanfdn.org/donate/havenworth-coastal-conservation