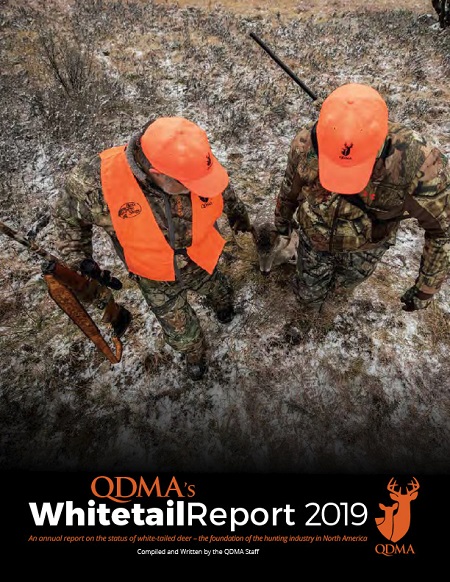 The Quality Deer Management Association (QDMA) today released its 11th annual Whitetail Report, a comprehensive update on the status of white-tailed deer including deer harvest trends through the 2017-18 season, the most recent hunting season with complete deer harvest data available from most whitetail states and Canadian provinces. Overall, the national buck harvest was on the rise while antlerless harvest fell, tipping the balance in favor of bucks for the first time in 18 years.

“The total antlered buck harvest of 2,879,000 in the United States was 2 percent more than the previous season, and 23 of 36 states increased their buck harvest,” said Kip Adams, QDMA Director of Conservation. “On the contrary, antlerless harvest was down slightly to 2,827,288. One state’s data did not arrive and was not included in this analysis, but it appears the national buck harvest exceeded the antlerless harvest in the 2017-18 season for the first time since 1998.”

Looking at the age structure of the buck harvest, yearlings (1½ years old) remained at record low harvest levels around 35 percent while harvest of 3½-year-old and older bucks remained high at 34 percent.

“It’s amazing to realize that one of every three antlered bucks shot in the U.S. is at least 3½ years old when it was one in every five only 15 years before,” said Adams.

Among other facts to be found in the new Whitetail Report:

Complete state-by-state estimates of total buck harvest, buck age structure, and many other harvest parameters are available in the full Whitetail Report, which also includes a look at numerous other critical issues for whitetails and deer hunters.

Printed copies will be available for $12 by pre-ordering at this link.

Each annual Whitetail Report is different, as they cover the most pressing issues of that year. To review all of QDMA’s Whitetail Reports going back to the first edition in 2009, visit QDMA.com.