Ask fishermen if the color of their fishing lures makes a difference and most will answer with a resounding, “Yes!”

But ask a scientist and you are likely to get a less enthusiastic, “Maybe” or “Sometimes.”

First let’s examine how fish see. Underwater, where visibility is usually limited to dozens of feet under even the clearest conditions, there is little need for long-range vision.

Fish have been described as being nearsighted, and can probably focus on objects much closer to their eyes than humans can. Cast a popping bug near a school of bluegill and one of them will often approach within an inch of the lure to inspect it—something that would leave an angler cross-eyed! Even when a fish first detects an object off to the side, it will usually turn and face it in order to examine it. Why? The likeliest explanation is that this brings the object within the narrow range of a fish’s binocular vision.

Unlike humans, many fish have their eyes set far apart on the sides of the head rather than to the front. This allows a very wide arc of monocular side vision for spotting predators or prey, but provides only a narrow range of overlapping binocular vision to the front. There is a blind spot to the rear, and the range of binocular vision to the front encompasses only about 30-45 degrees. For this reason, some experienced anglers believe a fish is more likely to spot a lure if it is cast to the fish’s side instead of directly in front of it. Once a fish spots something, turning to face it undoubtedly gives the fish a better estimate of the object’s distance. Even though fish will turn to examine objects, their eyes do have limited independent movement within the sockets. Like humans, a fish’s eyes move in unison when looking around.

And finally, the big question facing anglers and lure manufacturers the world over: Do fish see color? Yes they do! In many cases fish color vision is probably comparable to that of humans. So you can justify purchasing Uncle Joe’s Bass Slayers in all thirty-two available colors! Like those of humans, fish retinas possess both cones for color vision as well as rods for black and white vision. During daylight, fish use primarily cones for vision. At night the rods, which provide much higher light sensitivity and resolution, are used instead. The process of switching between using cones instead of rods (and then back again) may take two hours, and a predatory fish whose eyes adjust more quickly than those of forage fishes will have a visual advantage during dawn and dusk—at least one reason why these times usually provide the best fishing. Sharks, interestingly enough, do not see color. 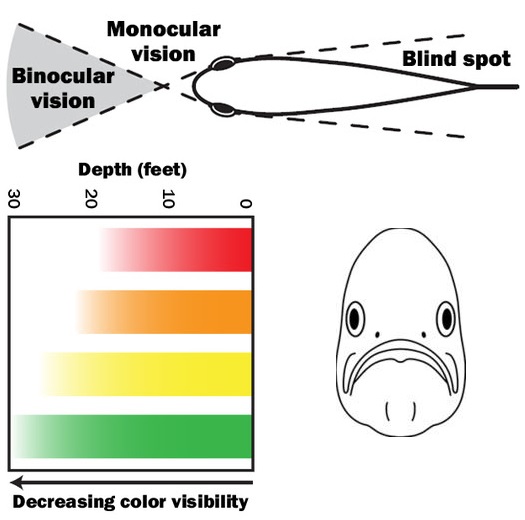 A very important factor in fish color vision is water depth. Water completely absorbs (or attenuates) different colors of light at different depths, affecting which colors are visible to a fish. Water attenuates red light from the spectrum first, oranges and yellows next, and blues and greens last (see the chart below). What this means is that at a particular depth a red lure will no longer look red but might appear as black or brown, while a green lure at the same depth could still look green. At even greater depths, colors are no longer visible and fish probably see objects in varying shades of gray. It is therefore not surprising that within both fresh- and saltwater fishes, shallow-dwelling species have better developed color vision than deepwater fishes. Of course, water turbidity that inhibits light penetration greatly reduces the depth at which a particular color is visible.

Despite the fact that red is the first color to disappear from the underwater spectrum, some research has shown that red elicits the strongest response from largemouth bass. Yellow was the next most important color for this species. Other research has suggested that largemouth bass also possess some of the better color vision among common sportfishes, followed by smallmouth bass, muskie, northern pike, rainbow trout, bluegill, crappie, and gar. Fishes which feed primarily by smell, such as catfishes, may have poor color vision in comparison.

We hope you “see” what fish see a little better now!