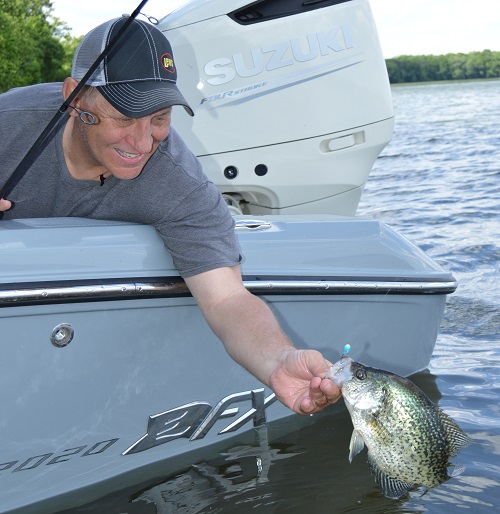 Nearly 30-years as an outdoor writer has given me some experience as a photographer as well. Most of my fishing stories are usually submitted for publication accompanied by a “fish” photo as well.  While I am certainly far from an expert, I have learned some things about taking outdoor photos, mostly through trial-and-error!  Here are some things I have learned that can serve as basics to others who want to get started capturing photos of their catches.

A very basic to taking good “fish” photos is the importance of lighting.  Having the sun at the photographer’s back is usually important as it allows for sunlight to shine on the angler (and fish’s! ) face, usually making for a better photo.

Along with keeping the sunlight on the subjects being photographed, timing the particular photo shooting session can be important as well.  Morning and evenings offer the best shooting conditions as the sun being lower in the sky at these times (rather than straight overhead) is often key to eliminating face shadows.

Though I realize fish photos are often taken when the catch occurs, the “golden hour”
(as the professionals I have worked with often call it) of early morning and evening are often prime time if you want to capture the very best photos.

The fish is the star

How you decide to hold and position the fish can be very important to taking a good fish picture, with a lot of options being available.  For me, a key is to hold a fish so he or she looks as comfortable and natural as possible.  Holding a fish very tightly or in an awkward or unnatural position has to have a detrimental effect on the fish and doesn’t make for a good picture either.

The oft-used vertical “lip and grin” shot where the fish is held vertical still works and is a good shot.  However, a horizontal shot with the fish held mid-body and out away from the body a bit is another nice shot.  Also, shots of the fish being landed or released over the water with water dripping from the fish add to the shot as well.

Using some imagination and creativity while trying different shots is not only enjoyable but can be the way to capture that perfect fish photo!

Another thing that I always try to do when “being shot” with a fish or when behind the camera is to smile or try to get the angler in the photo to smile.  Afterall, fishing is fun and catching a camera-worthy fish was probably an enjoyable experience so a smile should be part of the photo as well!

Catching fish certainly is fun!  Another way to add to the catch and the memories of successful fishing trips is by capturing those moments on camera.  Using some of the ideas offered above can help those who want to get started capturing  fish and good “fish” pictures as well!

As always, good luck on the water and remember to include a youngster in your outdoors adventures!

Mike Frisch hosts the popular Fishing the Midwest TV series and is a co-founder of the Bass Pro Shops and Cabela’s School of Fish.  Visit fishingthemidwest.com to learn more!