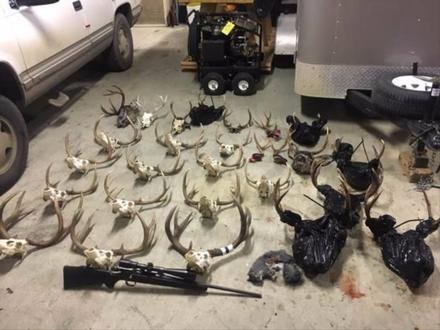 “We’re not aware of anything on this scale,” Kick said.

The investigation began across the Columbia River in Oregon late last year. According to court documents, Oregon State Police spotted something unusual from one of their trail cameras in The Dalles. Photos showed two men exiting a truck carrying head lamps and a set of rifles. Officers later found a headless deer carcass in the area.

A couple days later, the same Oregon state troopers spotted the truck again in The Dalles and pulled it over. The two men driving, Martin and Haynes, later confessed to illegally killing the deer and a gray squirrel in Oregon.

The incident led the Oregon State Police to alert the Washington Department of Fish and Wildlife, who were given consent to search the homes of Martin and Haynes on Dec. 3, 2016 in Longview, Washington. WDFW officers said by the end of the night, they had recovered 27 buck deer heads and antlers, 23 of which came from Oregon.

With the help of a search warrant on Haynes and Martin’s phones, officers found numerous photos, videos and text messages detailing an extensive poaching operation. The digital evidence documented the unlawful slaughter of more than 100 animals including black bears, cougars, bobcats, deer and elk.

“This ranks at the top,” said Capt. Jeff Wickersham, who patrols southwest Washington’s District 5 for the WDFW.

“There’s been other violations across the state where you have a small group of people that unlawfully take and poach a number of animals. But we’ve never seen anything like this.”

Wickersham said authorities have been able to locate more suspects in the case by culling through the cellphone data. The suspects had also left the locations on and the GPS coordinates have allowed officers to survey the original sites where the poaching took place.

Wickersham said many of the photos and videos revealed the suspects posing with their kills. A lot of times, they were able to go back to those sites and find bones or bodies of decomposed animals.

At one location, officers found a shotgun slug that had been left behind.

“This was a slap in the face,” Wickersham said. “A lot of this was taking place in broad daylight, in public areas. It’s not common to find people this brazen.”

Washington State Department of Fish and Wildlife has 135 enforcement officers assigned to oversee the whole state. Wickersham said of those only about 16 patrol his southwest Washington district.

“Because we’re spread so thin,” he said. “We weren’t there. And we let those animals down.”

WDFW expects more arrests in the coming weeks and anticipates as many as 20 individuals could be involved. Some of the suspects have prior unlawful hunting convictions and could face Class C felonies that carry a penalty of up to five years in jail and a $10,000 fine.

A trial date for just one of the suspects, Haynes, has been set for Dec. 11, so far.