Commercial fisherman David Haworth offers fresh Pacific bluefin tuna for sale to markets and individuals in his home of San Diego.  Haworth found that the demand for bluefin started to decline last season.  He thinks it may be because buyers misunderstand the message about bluefin being overfished across the Pacific. “We used to be able to sell Pacific bluefin tuna, but now the markets [e.g., grocery store and restaurant chains] are concerned about the message,” Haworth said.

The reality is Haworth and his colleagues on the West Coast have been harvesting bluefin legally and sustainably, and consumers can purchase the fish with a clear conscience. That is because while Pacific bluefin currently are defined as “overfished”, the U.S. implements conservation measures and ensures that the stock can rebuild even while limited harvest continues.

“Under the Magnuson-Stevens Act (MSA), our goal is to rebuild the stock as quickly as possible while also taking into account the needs of fishing communities,” said Barry Thom, Deputy Regional Administrator for NOAA Fisheries’ West Coast Region.  “Therefore, limited harvest may still be permitted that will both safely rebuild the species and help sustain fishermen, working waterfronts, and important jobs in the seafood industry.

Pacific bluefin tuna is a highly migratory species, often traveling thousands of miles throughout the Pacific Ocean.  They spawn in waters off of Japan in the Western Pacific and some juveniles migrate to the eastern Pacific Ocean off of Mexico and the United States. 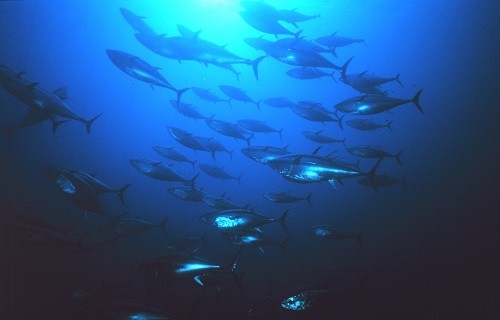 Measures are in place both internationally and domestically to rebuild Pacific bluefin. While many countries harvest bluefin throughout the Pacific, Japan and Mexico harvest the majority. U.S. harvest accounts for less than two percent of all commercial Pacific bluefin catches. Even this low harvest level can help the U.S. fishing industry and fishing communities remain resilient as part of a portfolio of fisheries they pursue throughout the year, especially in the face of ever-fluctuating environmental and socio-economic conditions.

The U.S. participates in international agreements through the Inter-American Tropical Tuna Commission (IATTC) and Western and Central Pacific Fisheries Commissions to manage bluefin throughout the Pacific.  The U.S. also implements domestic regulations under the Tuna Conventions Act and the MSA.  Under the MSA, U.S. fishermen operate according to the most robust and transparent stewardship laws in the world.

A dynamic, science-based management process is fundamental to sustainable fisheries.  NOAA Fisheries and, in the case of Pacific bluefin tuna, the International Scientific Committee for Tuna and Tuna-like Species in the North Pacific Ocean (ISC) conduct stock assessments – a census of fish populations –  using sampling technologies and modeling techniques to estimate how many fish are in the water.  Fishery managers use this best available science to make management decisions. For example, in 2013, stock assessments on the Pacific bluefin tuna showed that the stock required further harvest reductions to be sustainable. Since then, the IATTC has reduced overall catches of Pacific bluefin in the eastern Pacific Ocean, and the U.S. subsequently reduced both commercial and recreational catch for U.S. fishermen.  The bluefin adjustments included a 40 percent reduction in the commercial catch from recent levels and lower bag limits – from 10 fish per bag per day to 2 fish per bag per day with a maximum of 6 fish per trip – for recreationally-caught Pacific bluefin.

“NOAA Fisheries is committed to using the best available science to promote a rebuilding plan that both conserves the stock for the long-term and maintains some opportunity for U.S. fishermen,” said Thom, who is also a U.S. Commissioner to the IATTC.

U.S. consumers can be assured that harvest levels that support rebuilding of the stocks make eating domestically caught bluefin a sustainable choice.  Bluefin tuna are typically found off of the U.S. in the summer months, so consumers can look to the local retailers for fresh Pacific bluefin tuna catch then.