The other day I got a call from my friend Stan wondering if I was interested in going on a deer hunt in Vermont.  He had planned to go on November 21st and though I had originally planned to chase “The Ghost” in Dunbarton on this day, I said “yes”.  “Why?”  Because I love Vermont. What I experienced on this day just confirmed my belief in this state.

Even though Stan has hunted this area before, has a camp there and grew up in Ryegate, this was going to be my first time hunting deer here.  A few years ago I hunted grouse in this area and I have fished for trout on the Wells River, just few miles away.  Because of this lack of experience I spent an extra amount of my time on my gear.

On this trip I carried my Henry .30-30 and Federal Fusion rounds.  As Ryegate is located in the northeastern part of Vermont I packed extra warm clothing into my Blackhawk pack and I brought extra first-aid gear to include some SAM splints.  I had already decided to dress in multiple layers that included Smartwool wool socks and a heavy wool pullover made by Stormy Kromer.  I also packed my meat snacks from The New Primal and some homemade trail mix.

Stan picked me up at 6:30AM and after a two ride we arrived at the spot we were going to hunt.  It was cold with the temperature reading in the mid-20s.  There was also snow on the ground.  While the snow cover was really nothing more than a dusting, it was enough for passing deer to leave tracks.

Grabbing our gear I went right to work and it didn’t take me long to pick up the deer tracks.  Most of the sign I found were does and they had come through earlier in the morning, probably sometime around first light.  Vermont has a buck only rifle season so does are off the list, but where there are does there will be bucks.  We just needed to find them. 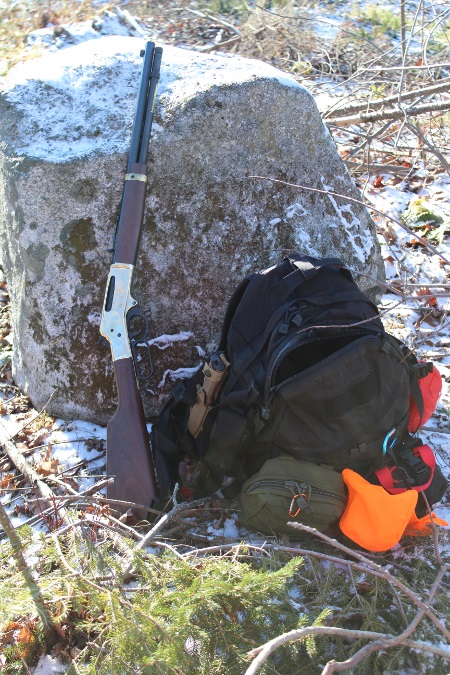 The funny thing about Vermont is that everything seems to uphill, and uphill we went.  As we gained elevation the smell of balsam greeted me.  There is nothing like the smell of balsam.  Here Stan and I opted to take different paths.  Perhaps we could push a deer into a position where one of us could get a shot.  Per the map, the direction we were traveling would eventually take us to a powerline and it was here that we decided to meet.

My path took me into a forest of balsam and hemlock, while Stan’s path went into a grove of hardwood of birch, ash and beech.  With the dusting of snow on the ground it felt like I was part of a Christmas card.  I moved slow, checking every possible location where a deer may be bedding down.  The path I was on was the remains of an old logging road.  Though the forest had reclaimed the road long ago, it was still fairly easy walking and it was the path the deer were using as evidenced by the number of tracks I saw.

We crossed the opening of the powerline and began climbing the ridge on the other side.  Here there was evidence of more recent logging activity.  Stan took one side of the logged area and I took the other.  On my side the ridge went I higher so I decided to head for higher ground.  I found a spot in a hardwood grove and decided to sit and wait.  I had a commanding view of the logged area, the powerline and a path through the hardwoods.  I also had a spectacular view of the Green Mountains on one side and the White Mountains in New Hampshire on the other.  With the mountains framing me it was almost a spiritual experience.

As the morning wore on the temperature rose.  Blue jays flew through the branches of the trees that surrounded me.  Cows bellowed on the farm in the valley below.  Partridge berries, their red fruit standing out from the snow, covered the ground.  As I scanned the area for any movement I was relaxed.  I lost all sense of time.  What seemed like minutes were actually hours.  All was good.  It wasn’t until the walkie-talkie cackled that I came back to the real world.  It was Stan.  We had sat for about three hours and neither of us had seen a thing.  We decided to call it a day and leave this magical place.

So why do I hunt?  It is the feeling of being alive.  It is pounding of my heart when I reach the top of a ridge.  It is the smell of balsam and hemlock on a cold, crisp morning.  It is the red berries standing out against fresh snow and it is the thrill of seeing and following the deer tracks.  It is the view given to me by the Creator.  All of these things make me realize just how small I am in the world as a whole and it is humbling.  This is why I hunt.