StarTribune Reported First – Sort of like the proverbial tree falling in the woods, if an angler catches a state-record fish and it’s so big it can’t be measured properly, does it count? Unfortunately for Kelsey Poshusta, the answer is no. But the 23-year-old woman from Adams, Minn., has a great fish tale to tell after catching a muskellunge nearly as big as her. When the massive muskie latched onto Poshusta’s line while fishing with her family July 2 on Lake Mille Lacs, it was the last thing she expected. “I’m the only one in my family who hadn’t caught one yet,” she said. “Bad luck I guess.” 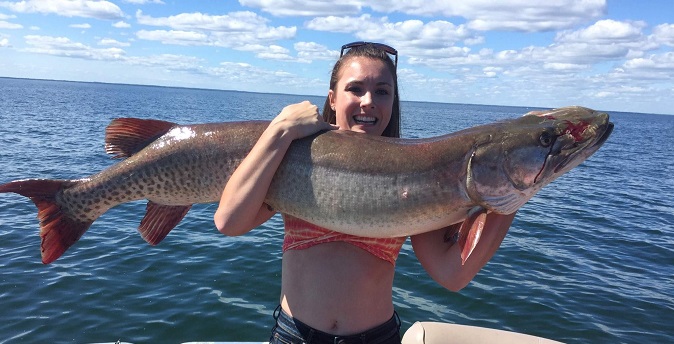 Poshusta knew the fish was big, but her dad, Derek Poshusta, is an avid muskie angler and he knew it was the biggest his boat had seen.

“I said, ‘Someone get a camera on this thing, it’s huge,'” Derek said.

Muskies are known to put up a good fight and the battle was on.

After wrestling with the mammoth muskie for 15 to 20 minutes, Derek netted the fish, they took some quick measurements and pictures, and got it back into the water within minutes.

The fish exceeded the length of the 54-inch measuring board that Derek had on the pontoon, so they held the fish up to the board and then recorded the rest of its length with a tape measure. The measurements came out to be 57.25 inches long and 26.75 inches in girth. Derek said he guessed its weight to be between 52 and 55 pounds.

To be considered for the state’s catch-and-release record, Poshusta would have had to take a photo of the fish that clearly showed the total length.

“That is one tremendous muskie. The girth on it is tremendous,” said Mike Kurre, mentoring and state records fish coordinator for the Minnesota Department of Natural Resources. “That would be a record in anybody’s record book.”

After looking at photos of the fish, and based on Derek’s measurements, Kurre said he also believed the fish to be at least 57 lbs.

The certified weight record for a muskie is a 56-lb., 54-inch-long, 27 3/4-inch-girth fish caught on Lake Winnibigoshish in Itasca County.

To beat this record, however, Poshusta would’ve had to keep the fish and weigh it on a state-certified scale.

Poshusta and her family have a fish story to tell anyway and the fish lived to swim another day. They said releasing the fish back into the water was more important than breaking a record.

“This is a world class fish that will put on 10 more pounds in the next two months,” Derek said. “I believe we will have a 60-pound fish in Mille Lacs by November and now someone else has the opportunity to catch it.”

A photo of Kelsey holding the fish was posted on the Muggs of Mille Lacs Facebook page, and has been shared more than 4,000 times.