Extreme Idaho Reported This Story First. After landing a monster, 57-pound lake trout, Soda Springs resident Sidney Cellan has reeled his way into the Utah record books. Cellan said he brought the 48-inch fish up from about 80 feet of water last month during his annual fishing trip at the Flaming Gorge Reservoir near Manila, Utah. 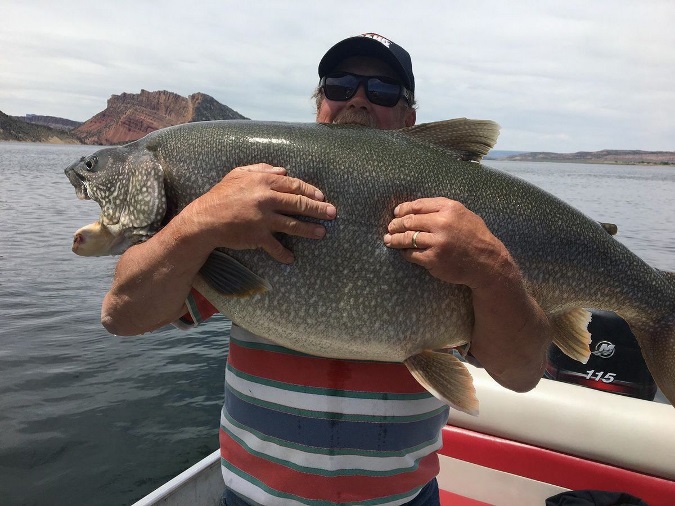 “Our guide estimated this fish was probably about 50 to 60 years old,” Cellan said about his record-setting catch. “It took me about 30 minutes to reel it in.”

Fishing with a friend from Victor, his son and their Utah guide, Jim Williams, from Creative Fishing Adventures, Cellan’s lake trout set a new Utah catch-and-release record, according to the state’s Division of Wildlife Resources.

For at least the last 10 years, Cellan has fished the Flaming Gorge with his friend, but never have their previous excursions been nearly as successful as the one this year.

“This was one of our best trips ever. Normally, we catch about seven to 10 fish,” Cellan said.

“We went out jigging and ended up catching a total of 27 fish in two days,”

In addition to the 57-pounder, Cellan said they boated two other fish over 35 pounds.

“And the day before, we caught probably 14 other fish between 12 and 35 pounds,” Cellan added.

As many fishermen would expect, Cellan declined to reveal exactly where he caught the fish and with what lure, as both are tight-kept secrets.

After pulling the fish into the boat for some pictures and measurements, Cellan released the fish back into the water.

“So somebody else can catch it,” Cellan said about releasing the fish. “You know if I kill all the fish that I catch then means there’s going to be less fish for other people to catch.”

Though it was his pole and hard work that landed the fish, Cellan preferred to credit their guide Williams for putting them in the right spot at the right time.

“We get out there fishing and we had fished all day until about 1:30 in the afternoon,” Cellan said. “Jim (Williams) watched it hit my line, and immediately, he knew it was a big fish.”

As soon as he hooked the fish, Cellan knew it was big because of how long it hung around the bottom of the reservoir.

“I was shaking because all I had was the 12-pound line,” Cellan said. “As Jim (Williams) watched him on the fish finder I felt him start up then head back down until eventually he turned his head up and I just started reeling him in.”

Did he expect to catch a record breaking fish? No, Cellan said, he was just fishing for a good time and a break from the monotony of everyday life.

Cellan said he knew the previous record holder, who also caught his fish with Williams as his guide. Cellan said that fish weighed 53 pounds, and the record was set about 12 years ago.

Despite catching the biggest fish in his life, Cellan said he will look forward to next year’s trip as if nothing has changed.

“This is just a great fishing trip,” Cellan said. “The weather was perfect, and I’ll look forward to this trip every year. Yeah, I caught a big one, but I’m sure there are bigger ones out there.”