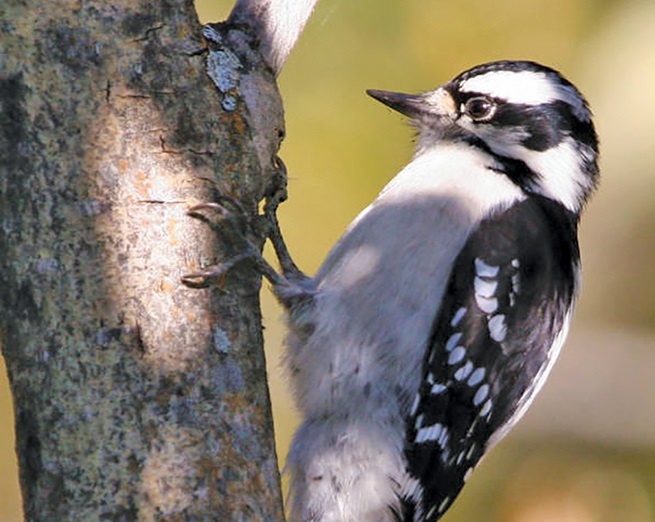 Action at the bird feeders was continuous. Red-winged blackbirds had arrived, scattered across the backyard, eating spilled seeds and fighting for position on the suet feeder. Cardinals and chickadees were hungrily feeding on black oil sunflower seeds. A dozen mourning doves had staked out a prime location under the thistle feeder.

A single downy woodpecker (Dryobates pubescens) was shuttling back and forth between a redbud tree and one of the feeders filled with a mixture of nuts. The downy would take a bite, scoot 20 feet to the safety of the redbud, eat the nut and immediately head back for more.

Although there was just one woodpecker, seeing him at the feeder was no fluke. Downies are widespread and common. Their range includes all of the continental United States except for the extremely arid Southwest and north of the tree line in Alaska. In Canada, they are equally dispersed from the Maritime Provinces to British Columbia and as far north as trees can grow.

They are also tolerant of humans.

One of the wonderful crowd-sourced programs run by Cornell University’s innovative Ornithology Lab is called Project FeederWatch. It collects data from thousands of participants who record the number and species of birds attracted to feeders in the winter. Five of the six North American regions analyzed in the FeederWatch effort reveal that downies are in the top 10 of species seen at feeders. In the Northeast Region, which includes most of the Chesapeake Bay watershed, downy woodpeckers were recorded at 92 percent of the yards enrolled in the program last year. Only chickadees and juncos showed up more often.

Downies are the smallest woodpecker in North America. At 6 inches, they are just a bit bigger than chickadees.

The downy’s head features black and white stripes punctuated by a shortish black bill and mahogany eyes. They have feather tufts just above the bill that protect their eyes and nasal passages from wood chips as the birds peck away at trees.

Males, like the one in our backyard, have distinctive red patches on their napes.

The body is black on top except for a large white streak down the back. The wing and outer tail feathers are spotted white. Downies are light colored underneath. The white parts get progressively duskier as one moves farther west and south.

As the name makes clear, woodpeckers need wood. Their diet consists mostly of insects and other tiny animals.(About a quarter of their diet consists of nuts, berries and seeds, especially in winter when insects are scarce.) Downies use their sturdy bills to open small crevices in trees to get at insects in their tunnels under the bark. They use their long, sticky tongues to reach their prey.

Because dying and dead trees harbor the most insects, downy woodpecker populations tend to expand in areas ravaged by tree pests and diseases such as emerald ash borers, Dutch elm disease and gypsy moths.

The downy’s adaptable bill — less chisel-like than those of other woodpeckers — can be used to prick open insect tunnels or as a tiny forceps to extract insect eggs. Part of the bill’s utility is evident in the birds’ tree excavations. They build nesting holes every year as well as several smaller roosting cavities nearby.

Downies are at least seasonally monogamous. The pair works together drilling nest sites, and the cooperation continues through the brooding and feeding of chicks.

Nests typically contain four to six eggs laid on consecutive days. The chicks all hatch at once 12 days later. They fledge in a bit more than two weeks, although they will rely on their parents for food for weeks.

Downy woodpeckers look remarkably like hairy woodpeckers. Although downies are much smaller, the overall color pattern is identical. At a distance, size can be hard to judge. Birders have developed a handy field identification trick. The hairy woodpecker’s bill is long, extending forward about the same distance from the base of the bill to the back of the head. The downy’s only goes about one-third of the way back. Other differences exist, but the bill length is the easiest identification method.

Although these two species have an uncanny resemblance, they aren’t even of the same genus. Bird biology has been revolutionized in the last decade, powered by molecular analysis of mitochondrial DNA. We now know that downy woodpeckers are most closely related to two woodpeckers of the Southwest: the ladder-backed and Nuttall’s. These three species are now classified as members of the Dryobates family.

This rapidly growing reservoir of knowledge is impressive. But as I watched the downy in my backyard probe away at the feeder, these developments weren’t foremost in my mind. To me, nothing is more impressive in the avian world than the singular life of a living bird.