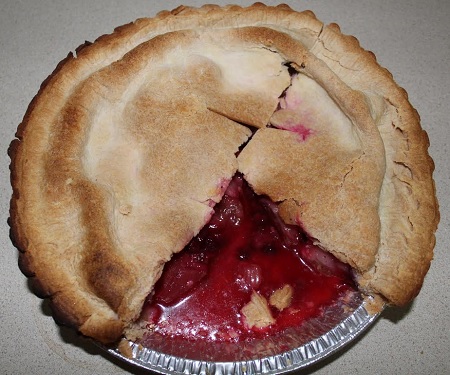 Well, the freezer is pretty empty.  The meat from last fall’s hunting season is long gone.  Around the Benner household we have been living off fish for most of the summer.  In fact, our dog is eating much better than we are.  As much as I like fish, enough is enough.

My wife is away taking care of aging relatives in Canada.  She has been gone for about a week and I miss her dearly (but don’t tell her that).  I want to make her a really good meal, but there is really nothing left but fish.

I broke down and bought a roast at the local grocery store.  With potatoes and an onion, I decided to prepare a meal welcoming my wife back home.  I also baked a rhubarb and blackberry pie, the ingredients I harvested and foraged myself.  From the attached photo you’ll see that I had to test the pie.  She won’t mind one slice being gone.

Taking out my Lodge enamel coated cast iron Dutch oven I began preparing the meal.  My wife just called me from the Canadian Border, which gave me about three hours to get everything complete.  I had my work cut out for me.

The cooking of the meal is not as important as the meaning behind it.  My wife has put up with a great deal.  As an outdoor writer you don’t make a great deal of money.  In fact, in some cases you don’t get paid at all.  Money for those extras isn’t always available, but she has hung in there with me and sometimes I don’t know why.  She deserves whatever I can do, and even much more.

Being an outdoor writer and living close to the land is not always what people think.  Both are a great deal of work.  As tough as it is for us, there are many people behind the scenes that support us.  We owe it to them to show them how much we appreciate their support.