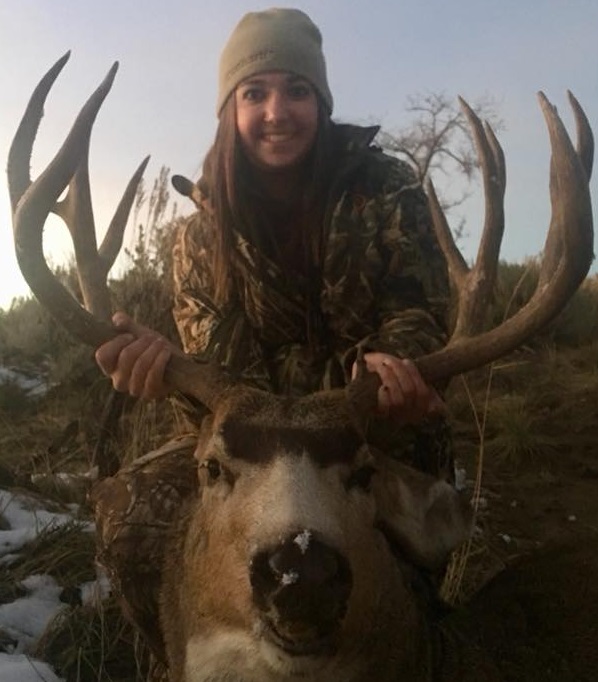 Mule deer must look out for Moffat County woman Erin Fagan. She hunts deer with her father, Lee Fagan, as a way of connecting with him and enjoying the great outdoors. During the second rifle season in 2017, the Fagans hunted a big buck on private land south of Craig.

In the following account, Erin relates the story and some of the life lessons she learned when hunting with her dad and their friend, Ray Talkington.

My dad set it all up. It was the best hunt that I’ve ever been on. It was the most fun. It’s a hunt I’ll always remember, because Ray Talkington, who has taken me and my parents under his wing, he passed away about a month ago, so it was a special time, hunting with him for the last time.

We had our hearts set on this deer since archery season. I kept telling my dad he should shoot him. “No, I want him to be your deer,” he kept telling me. It was the biggest they had seen in that area. So, I drove down from Nebraska, where I’m in college.

When we saw him, the deer was walking along a ridge, along an alpha field. Once you shoot a deer, you’ll never forget it. You hear the whop as the bullet hits the animal.

When I shot this deer, it was about 250 yards. I heard that “whop,” but he took off running with other deer.

At first, I thought, “Well, I guess I missed him,” and I told my dad we should find another buck. But my dad told me that if you hear that whop, then you need to go find him. The important thing is that we find this animal. We have to find this deer. We have had our heart set on this, and we can’t let this go.

That was another learning point in my hunting career. Dad spotted blood. We walked the blood trail to find him and were coming up on the fence line to another property. I was getting discouraged. They live in Virginia, so if he jumped the fence, I wasn’t sure we’d be able to get him. I had about had it.

I was getting discouraged. I’ve never missed a mule deer in my entire life. But we stuck with it, and got him. I will never forget it.

Hunting with my dad is one of the best experiences. My dad is my best friend. It’s special that we get to spend quality time together. Of course, I love my mom too, but it’s just really special.

Besides spending time with my dad, I know that, when I shoot an animal, I get to provide for my family. We don’t have to go out and spend hundreds of dollars on meat. My parents have raised me for 18 years, so to give back, and being able to help them out with food is very rewarding.

This season, I have a Unit 201 bull tag. That’s a trophy unit that I got after six years of drawing. Some people have been drawing for 10, 20 years, and I got my tag in six. Continue – https://www.craigdailypress.com/news/colorado-hunter-2018-bagging-one-of-the-big-three-mule-deer-hunting-in-northwest-colorado/