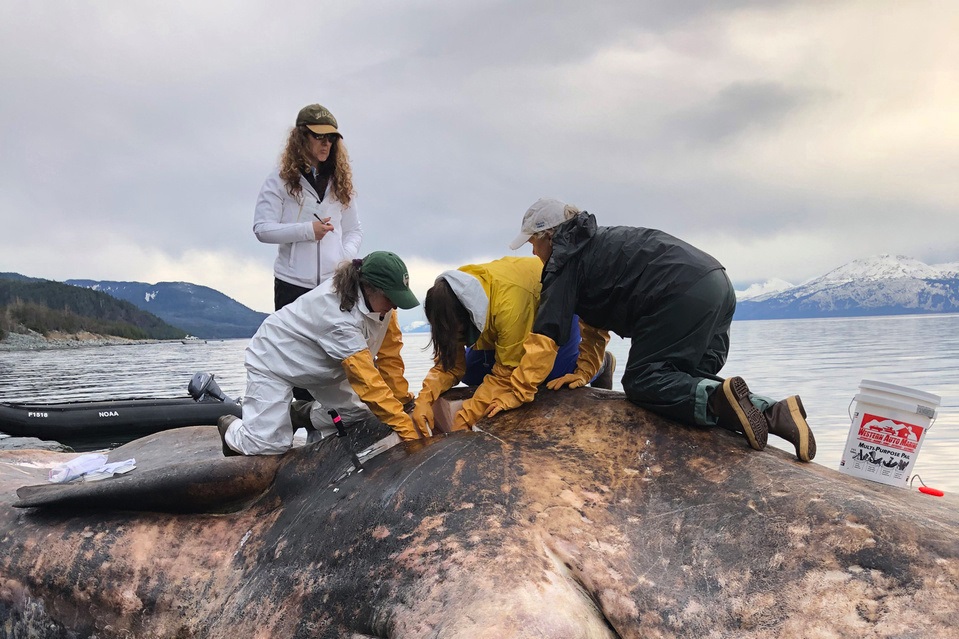 It was a rare find: a dead sperm whale washed up on a beach in Alaska’s famed Inside Passage in Southeast Alaska. Sperm whales, which are endangered, usually hang out in deeper, offshore waters. This one—a 48-foot long male—was found beached on the east side of Lynn Canal, north of Berners Bay near Juneau.

This is the first time NOAA Fisheries has had a report of a dead sperm whale in the Inside Passage. Its discovery provided a unique opportunity for marine mammal experts from NOAA Fisheries, Alaska Department of Fish & Game, Sitka Stranding Network, and University of Alaska to perform a necropsy (or animal autopsy).

“This is an exceptional opportunity for a marine mammal biologist,” said Kate Savage, NOAA Fisheries lead veterinarian on the necropsy. “There are a lot of unknowns around sperm whale biology and life history in Alaskan waters, so we could learn a lot from this stranding.”

On March 20 a team led by Savage collected the whale’s teeth to determine age, blubber to check for contaminants, and a variety of tissue samples to examine DNA and other health indicators.

Only two other sperm whales have been necropsied in Alaska since 1990. The first was a partial necropsy of a whale that stranded in Resurrection Bay in 2006, the second was a calf that stranded near Homer in 2009.

Researchers with the Southeast Alaska Sperm Whale Avoidance Project (SEASWAP) are working to determine if the dead sperm whale is one of three known individuals to frequent Chatham Strait and Lynn Canal, based on tagging data collected in the past five years.

“We have photos of only three individual sperm whales which have been sighted in Chatham and Lynn Canal, and we would love to know if it is one of those individuals,” said necropsy team member Lauren Wild, a doctoral student with the University of Alaska Fairbanks College of Fisheries and Ocean Science who works with SEASWAP.

SEASWAP is a unique collaboration between commercial fishermen, scientists, and fisheriesmanagers. They use acoustics, tagging, tissue sampling, and photo-identification to learn more about sperm whales in Southeast Alaska. Their ultimate goal is to test deterrents and strategies to minimize interactions between the whales and fishermen.

Wild says nearshore waters are not typical sperm whale habitat, but the canyon-like depths of Chatham Strait make it highly productive. Lynn Canal gets narrower and shallower, but if there are abundant food sources, whales could be expected to explore farther north. The first official sighting of a sperm whale in Chatham Strait was in 2008 during an Alaska Department of Fish and Game sablefish survey, but there are anecdotal reports from before that time.

Scientists suspect the sperm whales first found the waters of the Inside Passage by following longline vessels into southern Chatham Strait. Most satellite tagging data indicate they have stayed in inside waters after the sablefish season closed, perhaps pursuing an abundant food source. In fact, the stomach of this animal contained almost exclusively beaks of squid, which Wild believes were magister armhook squid and have been seen in large quantities by fishermen in Lynn Canal.

Foraging is consistent with why sperm whales come to Alaska in the first place, and why they are all almost certainly male. 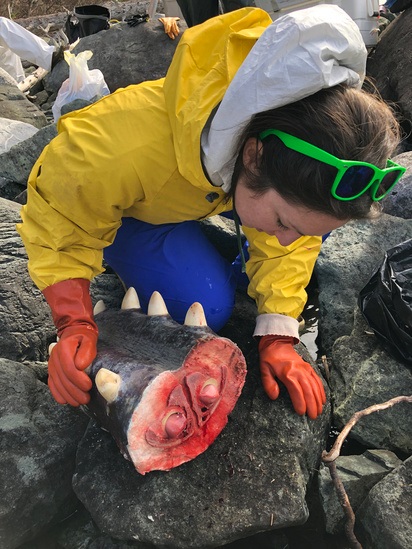 “The theory is that male sperm whales leave their natal grounds in the equatorial region between 10-12 years of age,” Wild added. “They come to Alaska to feed so they can get big and fat so they can be more competitive for breeding.”

Sightings of sperm whales are rare in Lynn Canal. That’s why we want to know if you see one. NOAA Fisheries Alaska Regional Office has received two reports in recent months.

“The Alaska State Ferry reported seeing four sperm whales off False Point Retreat in December, and two in lower Lynn Canal near Point Howard early in March,” said the region’s Whale Alert expert and protected species biologist Kristin Mabry. “We don’t know if this is a new phenomenon or if people are just more aware of sperm whales in our area.”

Mabry says reports of whale sightings by the public can help protect whales from vessel strikes.

“Whale Alert is a NOAA app that anyone can use to report whale sightings. You don’t need to be in an area with cell service so long as your device is GPS enabled. The data you submit will be transmitted once you are in cell tower range.”

Real-time data from the Whale Alert app informs professional mariners when a whale is in the vicinity of their route so they can be extra vigilant and slow down. This helps to prevent vessel strikes.

“Of course, if you see something rare, we are always happy for you to call in the report as well. The number is (907) 586-7235,” added Mabry. “Photos are very helpful, especially for sperm whales or other rare species. It is very important for us to document sightings of these less seen species so that we can more accurately promote their conservation.”

Necropsy findings indicate the male sperm whale near Berners Bay died from trauma consistent with a ship strike. The team documented fractured vertebrae and three deep propeller slices into the whale’s side.

“The space between the slices, the depth of the slices and associated damage indicate this whale was struck by a large vessel,” said veterinarian Kate Savage. “We also took samples that will help confirm our findings.”

Savage led a second marine mammal team to obtain stomach contents from the whale, as the incoming tide prevented collection of those samples during the first visit. The stomach contained lots of squid beaks, but no plastic and no sablefish parts. Multiple sperm whales have been found dead with significant amounts of plastic in their stomachs in recent years, so the team was pleased not to find any in this Alaskan whale.

“I don’t think this was one of the longline bandits,” said Lauren Wild, sperm whale researcher from Sitka. “The flukes of this young male do not match any individuals in our catalog.”

NOAA reminds the public that no parts of a marine mammal listed under the Endangered Species Act may be collected, except for authorized scientific purposes. When the second necropsy team returned to the whale carcass to collect stomach contents, someone from the public had removed and taken most of the lower jaw. NOAA encourages whomever did this to return parts from this endangered animal to NOAA’s Office of Law Enforcement. If you have information on this violation, or possible violations of our other federal marine resource laws, report it to the Office of Law Enforcement 24-hour hotline at (800) 853-1964, or the Alaska Division direct at (907) 586-9329.