As the peak of the rut approaches in most of the whitetail’s range, so does the peak of deer-vehicle collisions. The Quality Deer Management Association (QDMA) offers suggestions based on scientific research to help motorists avoid unwanted encounters with whitetails. 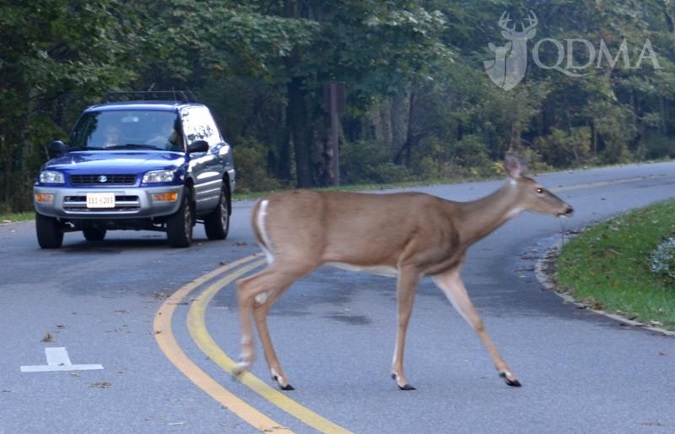 While the peak of the deer breeding season, or “rut,” varies in timing throughout North America, the majority of whitetails breed from late October through December, with a peak in November. The peak in breeding also brings a peak in deer movement, and this puts more deer in roadways than at any other time of year. Numerous scientific studies have shown a strong correlation between breeding dates, deer movement, and deer-vehicle collisions (DVCs).
“Bucks are covering a lot of ground during the rut in search of does, they’re chasing many of those does, and until they are receptive, many of those does are running from the bucks,” said Kip Adams, QDMA’s Director of Education & Outreach and a certified wildlife biologist. “A lot of these deer are crossing roadways in the process, and that’s why we see a peak of deer-vehicle collisions in November.”
It is estimated that more than 1 million DVCs occur annually in the United States, resulting in approximately 200 human fatalities and nearly $2 billion in property damage. Here are some tips that can be effective at helping motorists avoid deer on highways.
Don’t Rely On a “Deer Whistle.” University of Georgia researchers tested a variety of sounds of different frequencies and intensities to see how deer on a roadway reacted. These sounds, emitted from a specially equipped car, included a wide range of the high-frequency sounds that “deer whistles” are claimed to emit. In hundreds of trials, high-frequency whistles did not change deer behavior from the way they reacted when no sound was being emitted.
Be Vigilant. This is your most effective defense against a deer-vehicle collision. In areas where woodlands adjoin the roadway, be on the lookout in the ditches and forest edges for deer. Deer are most active in the hours around dawn and dusk, but during the fall breeding season they may enter roadways any time of day.
Recognize Local Danger Zones. Become familiar with local areas where woodlands create natural “funnel points” for deer near roadways, and pay extra attention to these areas. Once you see a deer on a roadside in an area you travel often, mentally mark that area as a danger zone when you return.
Use Your High Beams. When traveling at night in suburban or rural areas, use your high beams whenever possible to help you spot deer on the roadside. Do not allow the high beams to cause you to become complacent about seeing deer. Continue to be extra vigilant.
Slow Down Early. When you think you see a deer ahead, slow down and be prepared to completely stop if necessary. At night, deer may be blinded or confused by your headlights and are not sure if there is danger or where it is located. They may dart suddenly in front of you.
Blow Your Horn. Once you spot a deer standing on the roadside ahead, slow down and blow your horn. The structure of a deer’s ears, and their ability to pivot each ear independently, makes them very good at pinpointing the locations of sounds. Blowing your horn repeatedly is likely to help the deer pinpoint the location of the threat and move away from the road. Again, slow down anyway – don’t make any assumptions about how the deer will react.
Watch For The Next Deer in Line. During the rut, a doe that runs across the road is very likely to be followed by one or more bucks. If you see one deer run across the road ahead of you, slow down and be prepared to stop.
Do Not Swerve. No matter how vigilant you are, sometimes deer appear suddenly and swiftly from the woods close to your vehicle. If you were cautious and slowed down, this will help you avoid a collision. But if a collision appears unavoidable, do not swerve into the opposite lane or onto the shoulder of the road to avoid hitting the deer. If you reduced your speed due to the proximity of woods, the damage to your car may be lessened. But if you swerve into oncoming traffic or onto the shoulder, where other obstacles may be in your path, you may worsen the situation.
Be safe this fall and use these tips to avoid vehicle damage or personal injury.
print