A close encounter with a sea lamprey might seem like the stuff of nightmares. Long, eel-like critters with a set of sharp teeth, lampreys look and act like Stephen King’s version of a leech. They feed by attaching to fish and rasping a hole in the fish’s side and extracting blood and body fluids. Although they may seem unsavory, lampreys have been a normal and natural part of Maine’s ecosystems for millennia. 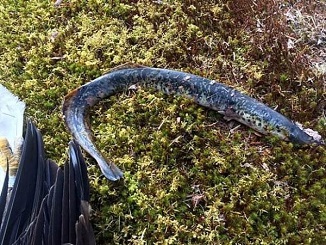 Lampreys are anadromous; like salmon and alewives, they spend their adult lives at sea. Adult lampreys, some up to three feet long, will move up large rivers like the Penobscot in late spring to breed. Finding their way into tributaries, lampreys spawn and build nests before dying.

Lamprey eggs hatch within two weeks, after which lamprey larvae move into mucky streams and shallow bodies of water. Blind and generally mud-dwelling, lampreys will filter feed algae and other plankton for four to eight years. Due to their small size and muddy habit, this more humble stage is seldom seen by humans.

After their larval stage, lampreys will begin metamorphosis to a pre-adult stage, known as “transformers.” At this stage, lampreys develop eyes and teeth. They make their way downstream, mostly by drifting, to the open ocean. They are still much smaller than their adult counterparts – reaching only four to eight inches long.

Young lampreys in freshwater also have little interest in feeding. Larval lampreys lack the teeth necessary to feed on anything larger than plankton. Transforming lamprey will occasionally attempt to attach to fish as they head downstream, though these cases are rare and typically only occur when downstream water flow is impeded. Only once they have reached saltwater do the vast majority of lampreys feed on fish.

This relatively benign story of lampreys in Maine is not mirrored in other parts of the country. Sea lampreys have caused a great deal of grief in the upper Great Lakes, where they are now considered invasive. Canals and shipping routes opened the way for lampreys to make their way into Lake Ontario in the 1830s and the rest of the Great Lakes in the 1920s.

Lampreys breed in Great Lake tributaries, but adults remain in the Great Lakes rather than heading back out to sea. These adult lampreys, unlike lampreys in Maine, feed on freshwater fish. Great Lakes fishes, having been naïve to lamprey presence until recently, are more heavily impacted than their marine counterparts. This has led to widespread fishery destruction in the Great Lakes, which has generated numerous conservation and sportsmen’s efforts to cull their nests in Great Lakes tributaries.

Next time you hear about lampreys wriggling through the state of Maine, remember that they are a normal part of our healthy ecosystems, and that lamprey woes in other states are unlikely to occur in Maine. The massive canal systems which allowed introduction of lampreys to the Great Lakes but keep them more-or-less landlocked are wholly absent from our state.

Just in case you were thinking about nabbing some lampreys for yourself (we can assume they do not make great pets), you’ll need a collection permit from Inland Fisheries and Wildlife.

By Zachary T. Wood, Special to the BDN
print