After a day of deer hunting in Vermont, we jumped in the truck with no deer to show for our efforts.  While Stan and I could come up with a list of excuses, but what is the point?  It doesn’t change the outcome.  We flipped on the radio and the local Vermont station just so happened to be broadcasting the local hunting report.  You just have to love Vermont.  You won’t find something like this in New Hampshire.  So anyway, the lady who was giving the report, and happens to be a hunter, was saying how the weather was playing a part in the deer harvest to date.  As she spoke I began to wonder about how weather plays a part. 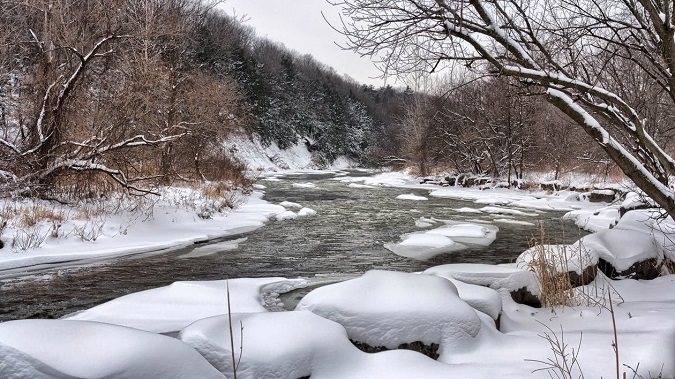 If you fish then you know how sudden changes can affect the fishing.  Rain doesn’t affect the fishing, but a change in pressure, like when a warm or cold front moves in, does.  So does water temperature.  That is fishing; what about hunting?

Weather controls all sorts of things on land.  When the weather cools down birds begin to migrate.  They don’t have a calendar to follow.  Their movements are dictated by the lengths of the days, temperature and available food.  We are all aware of the abnormally warm weather we have been having.  Whether you believe in the cause of global warming, we all must admit that it is happening.  How is this change affecting the wildlife and thus, our hunting?  I noticed this year that the woodcock migration from Canada was late.  Why?  Because there was no need for them to move.  The warmer than normal temperatures made more food available.  It is late November as I write this.  Bears should be going into hibernation and there should be about a foot of snow on the ground by now.  Instead temperatures are in the 50s.  There is plenty of food still available so the bears are still active.  Even the chipmunks are still running around when normally they would be riding out the cold in their burrows by now.

What kind of effect is this abnormal weather having on the deer?  Hard to say, but to me the deer seem to be still in their summer pattern.  Though I know that they are out there, the bucks don’t seem to be gathering the does as they normally do.  I’m seeing does as singles or pairs, not groups.  Though I have found tracks, I have yet to find any rubs or scrapes.  Has this warm weather delayed the rut?  If so, what will this do to the deer population going forward?  Will mating take place later, thus having he does give birth later in the year?  If this happens how many young will survive?  I’m not a biologist so I can’t answer those questions, but it does make you wonder.

Here in northern New England moose are a major draw for hunters and wildlife watchers alike.  Over the past few years we have seen the moose numbers in New Hampshire and Vermont drop.  Is weather to blame?  Probably.  The moose are being literally bled to death by ticks.  Ticks need a hard frost that lasts for days to drop their numbers, but this warm weather has only increased their numbers.  With no cold weather the ticks don’t die off.

Is this a sign of things to come?  Will the moose disappear?  Will the deer hunting as we know it be a thing of the past?  Will cold spring rains eliminate the wild turkey?  What will climate change do to the furbearers and the trapping industry?  Only time will tell, but in my eyes it doesn’t look good.