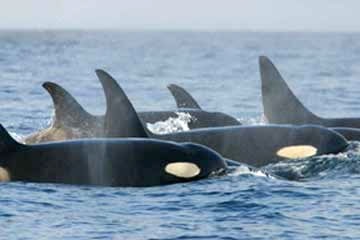 The Washington Fish and Wildlife Commission has signaled its support for state fishery managers’ plans to consider the dietary needs of endangered orcas when they set this year’s salmon-fishing seasons.

The commission, a citizen panel appointed by the governor to set policy for the Washington Department of Fish and Wildlife (WDFW), directed the department to take that action in a policy adopted at a public meeting Jan. 11-12 in Olympia.

The declining availability of salmon – SRKW’s primary prey – and disruptions from boating traffic have both been linked to a downturn in the region’s orca population over the past 30 years.

Ron Warren, head of WDFW’s Fish Program, welcomed the new policy, noting that the department has been working to address those issues for several years.

“While state fishing seasons have long been subject to federal review, this new policy confirms that WDFW must play a leading role in orca recovery,” Warren said. “This year we plan to work with the National Marine Fisheries Service to develop new tools to assess the effects of fisheries on available prey for endangered orcas.”

Consistent with the recommendations of the state’s Southern Resident Orca Task Force, WDFW is also seeking state funding to:

In other business, the commission was briefed by WDFW staff on a variety of issues, including whale entanglements in coastal crab gear, night-fishing rules, pronghorn management, proposed wildlife-rehabilitation rules, and the Puget Sound Chinook Management Plan.

Information about those and other issues is available on WDFW’s website at https://wdfw.wa.gov/commission/meetings/2019/01/agenda_jan1119.html.

On the second day of the meeting, the commission elected a new leadership team to serve for the next two years.

Larry Carpenter of Mount Vernon was elected to chair the commission, replacing Brad Smith, who served as chair for the past four years. Carpenter, who has been involved in fish-management issues for decades, has served on the commission since 2011 and was recently appointed by Governor Inslee to another two-year term. He has served as vice-chair since 2017.

Barbara Baker was elected by her fellow members to serve as vice-chair of the commission. Baker, who lives in Olympia, was appointed to the commission in 2017.

Additional information about the new commission officers is available on WDFW’s website at https://wdfw.wa.gov/commission/members.html.