By Jeff Samsel, “I hope we at least see some trout,” Asher said for the third time about 2 hours into our long ride from North Georgia to Arkansas’ Dry Run Creek.

I just grinned and told him I thought we would. I really knew we’d see a bunch, and he acknowledged the humor in that question as he glimpsed Dry Run Creek for the first time. His eyes widened when he saw how many fish live in this special stream for youth and handicapped anglers. 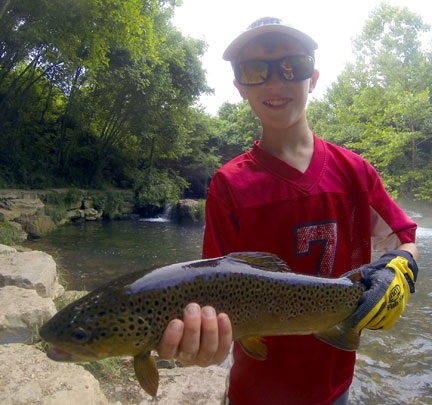 In truth, Asher kind of knew already. He’d heard about Dry Run’s suburb trout offerings year-after-year from me and his older brother. In fact, following big brother’s footsteps was a major part of Dry Run’s draw and helped carry Asher though our 12-hour car ride, which started at 2:30 a.m.
I suppose he didn’t want to get his hopes too high and be disappointed were he to not see trout. No concerns there. We saw hundreds, and by the time the day was done, Asher had caught and released 15 trout and had close encounters with about as many. It would be hard to even guess at how many swiped at his lures.

The fish weren’t simple fare, though. Seemingly pressure has been pretty high this summer, because they were pretty finicky.