To catch giant trout on a consistent basis, anglers have to do a lot of things right. In addition to excellent vision and hearing, a 30-inch trout has 15 to 20 years of experience in avoiding species higher up the food chain. The fish guys at Hobie asked me to list seven tips for increasing your odds of success. I didn’t bother to count, but for whatever it’s worth, here’s some of the stuff I’ve learned in over 30 years of chasing big seatrout in shallow water.

The most obvious piece of advice is to fish where big trout reside. To paraphrase Supreme Court Justice Potter Stewart’s description of pornography, I can’t define big-trout terrain, but I know it when I see it. Common components include shallow feeding areas with deeper refuge nearby, with a varied bottom structure consisting of some combination of grass and sand; the presence of rock, shell or gravel is a definite bonus. I don’t bother to fish unless some type of forage is obvious—preferably sardine or mullet schools. Finally, a strong tide should be flushing that bait across the structure.

Trout of all sizes gravitate to edges, those spots where grass transitions to sand, or shallows fall away to deeper water. Because we chase Florida trout, snook and redfish on what we refer to as grassflats, many anglers mistakenly target grassy areas. In reality, trout spend the vast majority of their time lying in ambush mode on sand, utilizing the grass only as refuge if threatened. If searching exclusively for big trout, don’t waste valuable fishing time on areas of solid grass. Likewise, if all you’re catching is small trout, move. Small trout rarely congregate in the same areas as large, cannibalistic adults.

Once the proper combination of factors is located, the approach is absolutely critical. Never, ever paddle over or even near areas suspected of harboring trophy trout. Go no closer than a long cast. If necessary, circle around the target area, and use the wind or tide to position the kayak. If the bottom is solid, anchor the kayak a hundred yards away, and proceed on foot — stealth, casting and lure presentations are all improved by wading. The exception is if the bottom is sticky, creating more noise and vibration than fishing from the kayak.

Either way, position yourself so lures can be cast up or across the current, preferably with the wind at your back or side to facilitate longer casts. The farther you throw the lure, the less likely the quarry will sense your presence. For this reason, I prefer not to sight-fish big trout, preferring to throw at distant spots I determine to be potential ambush positions. If I can see a big trout, she probably also knows I’m there. The exception to this may be in the northern Indian River or Mosquito lagoons, where giant specks predictably gravitate to known sand holes, where they can be targeted with a silent approach. 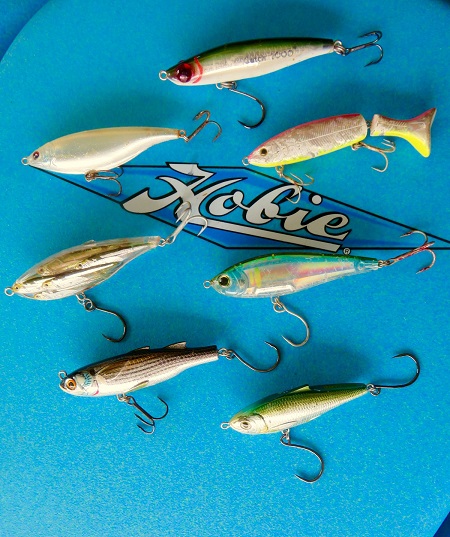 Conventional wisdom has long dictated that trophy trout can only be caught in low-light conditions. However, I want to see what I’m casting at, and I can’t locate subtle dropoffs and transition edges — let alone fish – when the sun is low on the horizon. For this reason, virtually every trophy trout I’ve caught has been in the middle of the day. Give me the last three hours of an outgoing tide starting midmorning, and I’m a happy camper. Not only can I more effectively locate productive structure, but the falling tide forces fish out of the shallows and concentrates them in deeper holes and along dropoff edges, where they set up to intercept bait also flushed off the shallows. Polarized sunglasses are an obvious necessity when stalking big trout.

Lure selection is simple. Spotted seatrout switch almost exclusively to a fish diet as they age. They aren’t afraid to eat large portions, including other trout; I’ve had monster trout eat 18-inch specks and snook as I reeled the smaller fish in. Because I prefer to hunt — and this is more hunting than fishing — in one to three feet of water, I rely on lures that run shallow and don’t entangle bottom grass. Twenty years ago, I often fished topwater plugs all day long. They still catch smaller fish, but for the last dozen years, old trout appear to have become more reluctant to break the surface in the middle of day.

If I’m strictly trying to shoot a trophy image, I pretty much stick to hard, suspending lipless twitchbaits in natural colors that run about a foot deep. The exception would come during the summer and early fall, when thick or floating seagrass demands a weedless lure. At that point, I generally toss a 6- or 7-inch soft-plastic rigged weedless on a weighted Owner 4/0 worm hook. Both lures allow long casts and can be twitched aggressively, the length of pause largely determined by the water depth and temperature; slow it down in the winter. In my experience, big trout aren’t overly leader-shy. I never fish less than 30-pound fluorocarbon in southern waters shared by line-slicing snook, and it doesn’t seem to deter the trout bite.

Finally, the term “trophy trout” doesn’t mean that I’m advocating that you should take it home and hang it on the wall. While Florida law allows one fish over 20 inches within the 5-fish bag limit, please keep in mind that these big fish are all females, and are much more valuable in the gene pool than they are on your grill. These old fish are, unlike redfish, also very delicate, and don’t survive prolonged or rough handling, especially in hot weather. Hanging a big trout vertically from a lip gripper is a virtual death sentence. Leave them in the water until the camera is ready, lift them out horizontally, supported by both hands beneath the head and belly, and shoot your trophy picture.