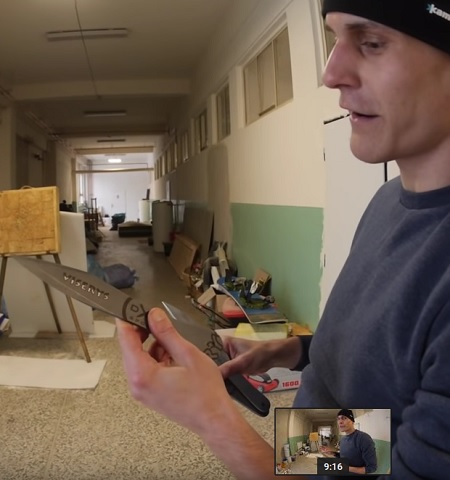 Today I did some work with my throwing knives and weighed each model. They range from 1 to 9 ounces. I know Adam Čeladín, World Champion knife thrower, says that the small lightweight knives like the Whetstone Cutlery Kunai models are not good and can be very dangerous if they rochette back. I agree, but the strange thing is that I had a higher no spin “stick” percentage at 7 and 10 feet than with any others. Perhaps this is because of the throw I’m having to develop, because of the injured right shoulder and collar bone, which is on my throwing arm side.

The worst I did was with the Hibben 9 ounce, 12″ tanto points, followed by the Schrade 4 ounce, 10″ knives.

My second best is the Hibben black Triple Thrower with paracord wraps, which weigh in at 5 ounces; followed by Cold Steel’s 7 ounce 10″ (measures 12″) Sure Flight.

Throwing underhand up to 7 feet I could stick about all of them, but again my best were the Kunai, Black Triple Thrower and Sure Flight.

It was very cold, but wanted to give them all a try, after which I dried them from the snow and gave them a light coating of Gun Protect by Red Eagle Technologies.

The paracord on the Kunai seems to be better than the thin one on the Hibben, but I took all of them and soaked the top and bottom end areas with Elmer’s Extra Strong Glue. As it dried it disappeared, and seemed to form a nice bond. However, actual throwing will be the ultimate test.

On the Kunai I have somewhat of a different throw, combining Adam’s index finger technique with pinching the large handle ring with my thumb and middle finger. Then I throw it somewhat side arm and down, as I did in my dart throwing days. Not sure why, but it works. Plus, they are very sharp points. So, as Adam correctly pointed out, be very careful if using these and having bounce backs and ricochettes.

With the Hibben Black Triple Thrower I’ll turn the knife upside down, and place the tip of my index finger in the finger hold area, and grip the knife with my thumb and other three fingers, such as Adam does with his normal “no spin” throwing technique.

If interested in knife throwing I definitely recommend that you watch Adam’s You Tube videos. He has a lot of good information on his techniques, which will help you develop your own. His channel is at https://www.youtube.com/channel/UCZOhMveylz2eyjIdG6SehJg