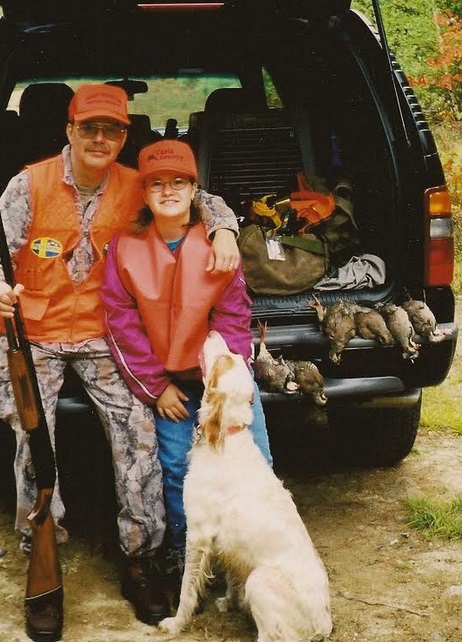 I was hunting pheasant at a location in New Hampshire called “Hill” yesterday with my friends Stan and Rene. It in itself is no big thing as “Hill” is a popular pheasant hunting location; in fact, it is one of the states pheasant stocking sites. Be that as it may, this story is not about me pheasant hunting. Instead, it is about giving back and teaching others.

When I pulled in to the parking area I was the only one there. Soon Stan and Rene pulled in and another truck followed them. The other vehicle had a firefighter marking on it (thank you sir). A man and a young lady stepped out of the truck. We got to talking and he said that his daughter was fairly new to upland hunting and he was hoping that she would get her first pheasant today. As I had no intentions of writing this article at the time I failed to get their names. I wished them luck and finished preparing my gear. Soon another truck pulled in with two young men and an adult. Both boys had shotguns, but it seems that the adult was there to teach and to work the dog. Warm fuzzy feelings filled me, as I remember those days going out with my daughter.

Early on I got my daughter Sarah involved in the outdoors. I still remember taking her to see her first wild deer (she was so small I had to carry her); of her feeding the birds at our home and teaching her how to identify wildlife sign. I remember her first fish and that that large smallmouth that I didn’t believe that she had on, her Zebco 101 training for all that it was worth. I remember her hunting with me and Jack, too young to shoot, but she loved the dogs and she was old enough to appreciate the experience.

Legal shooting time was approaching so Stan, Rene and I headed down into the field; each of us taking a different location. When it was legal I load up and made my way down a snowmobile trail. As we were not using dogs, we had to make sure that we walked slow and used all of our senses. I rounded a bend in the trail I flushed two cock pheasants out of the brush. One ended up in my bag, the other flew safely in to the woods. A bit further down the trail I flushed a hen, but she too headed into the woods. I could have shot, but that wasn’t the thing to do as I would hate to wound the bird or not be able to find it. Ah, my kingdom for a dog. 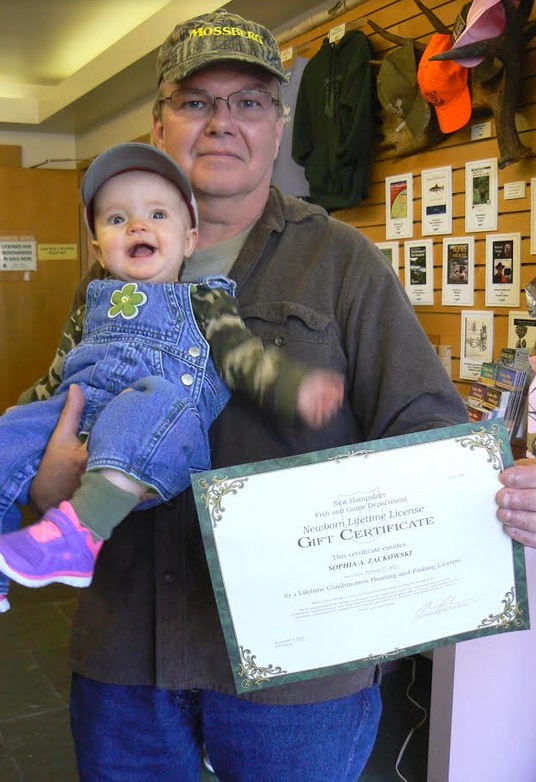 As I entered the field at the end of the trail I ran into the man with the two boys. I told them about the birds I had flushed and the general location where they were. I suggested that he take the dog and the boys back down the trail and see if they could find them. The man thanked me and they proceeded down the trail from which I had come. I heard shots coming from the trail, but I have no idea if they got the birds or not. I could have continued hunting the area, but for me it was more important for the boys to get some action.

Today’s youth are too involved with the electronic world so it is good to see adults getting their kids, or someone else’s kids, out in the field. I made it a point to purchase a New Hampshire Lifetime Hunting and Fishing license for my grand-daughter Sophia when she was born. That is how important I think it is. She is only two now, but she has already caught her first fish. Actually, it was very close to where her mother caught hers. Whether Sophia chooses to follow this path or not, the choice is hers, but at least I got her started and Grandpa will be here to help her along the way. Now my daughter is expecting another little girl. Grandpa will buy her a license as well. If we want our outdoor heritage to survive we need to teach our children now.

Early on I got Sarah involved with hiking, hunting and fishing. While she never really got into hunting, she still goes fishing, as well as, canoeing and whitewater rafting. I taught Sarah the importance of giving back and helping kids not as fortunate as she was. She helped me teach some inner city kids how to fish. She also helped me teach some kids with physical obstacles how to fish. Now she is teaching Sophia all those things that I taught her. She is passing on the tradition.

I came out of the field with one pheasant to my name, but that is OK. I have no idea how that girl made out, but I hope she at least got her first bird. I also have no clue how the boys made out. I’m sure they learned a great deal whether they got their pheasants or not.

The bottom line is that they were out there. They were learning skills that no video game will ever teach you and that is all that matters.

We all had someone to teach us so now it is up to us to pass along that knowledge. At the end of the day it doesn’t matter how many fish you caught or how many pheasant you shot or how big the buck was. It is about the experience and sharing that with others. When you do it will give you that warm and fuzzy feeling.