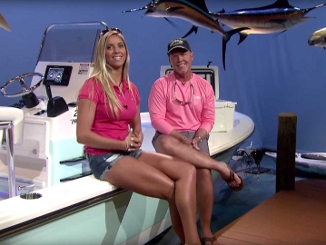 Wahoo are a mainstay gamefish in the Florida Keys and one we target all year round. In the summer months, there’s basically two ways to specifically target wahoo; you can find blue water and troll ballyhoo and mullet or slow troll with live baits, or you can run and gun looking for the larger floating items out in the ocean.  If trolling is your game, you’re going to be a lot more effective if you get your baits down below the surface. Wahoo like to sit deep in the water column, which is why wire lines and downriggers are so effective at targeting them. You can also use a 24 to 48 ounce trolling lead. Put the lead about 50 feet in front of your baits and use 100 to 150 pound monofilament between it and your wire leader and bait, and that will get your bait down 20 to 50 feet, depending on how fast you troll and how large of a bait you’re pulling. You’ll want 30 to 50 pound conventional tackle that holds a lot of line, because wahoo will make a long initial run.  Wahoo are toothy fish, so you want to use a wire leader. I like #7 or #8 wire, which is a little heavier that what most people use, but I don’t want a big fish biting through the wire. You also want to use a “J” style hook and not circle hooks, since wahoo don’t have much in the way of lips or a defined corner of the mouth like a snook or a grouper.  Wahoo are fast, so you can troll a little faster than you normally do, and you want to double hook all your baits to prevent a smaller fish from biting off the tail and missing the hook. Two 9/0 J hooks usually works. I also like to fish skirts on my baits when targeting wahoo to make the bait look larger and to give it a lot of contrast and definition.

If a wahoo is looking up at the bait, you want something that will stand out against the surface of the water, so the two-tone skirts like a Black and Red or Blue and White Ilander Lure are a good way to go.  Wahoo will also strike lures, and there’s a bunch of them on the market that work well, like a Yo-Zuri Bonito, or Williamson Wahoo Catcher. Around the new and full moons the fish tend to feed right at dawn, so there are some guys who will run out in the dark and fish until 9 a.m. and be back at the dock with a wahoo or two in the box.  Probably the best way to target wahoo this time of the year is to look for floating structure like a tree, pallet or something large that is floating deep in the water column. The wahoo will school up around these items, particularly the small fish under 20 pounds, and you can slide up and pitch out a Speedo or other live bait on a spinning rod with 20 or 30 pound tackle and a wire leader and catch multiple fish. It’s not uncommon to find a bunch of dolphin around the same floating debris, and catch a few of those before you get a wahoo. As a rule, the wahoo will be deep, below the dolphin, so you have to get a bait down to get bit.  When you hook a wahoo, it will make a long run with a lot of head shakes. Then it will charge the boat and try to put a lot of bow in the line so the hook will fall out. You need to keep a tight line at all times, and any time you can gaff the fish, take your shot. When you get a wahoo close to the boat, it will shake its head like mad trying to dislodge the hook, and a lot of fish are lost just out of gaff range by an angler letting slack get into the line when the fish are shaking their heads.  When you get that gaff into a wahoo and pull it aboard, immediately grab the fish’s tail and control where its mouth goes. Wahoo are known for turning and biting people, even when lying on the deck, and with a mouth full of teeth, the result is usually a trip to the emergency room for the person who got too close to the toothy end of the fish. Control the fish all the way into the fish box or cooler, and then you can relax and high-five once you know the fish can’t hurt anyone.