Predation by killer whales has been proposed as a cause of the decline (and lack of recovery) of the western stock of Steller sea lions. The National Marine Mammal Laboratory’s  (NMML) Cetacean Assessment and Ecology Program (CAEP) has conducted studies of killer whales in the Aleutian Islands since 2001. 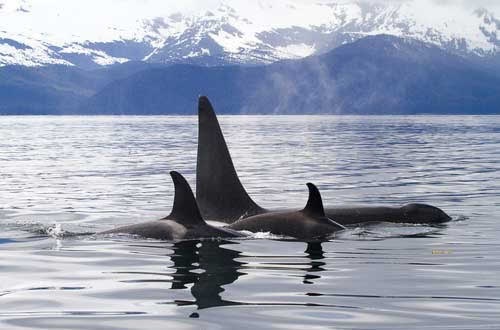 During CAEP surveys, Bigg’s killer whales have been regularly seen in two areas in the central and western Aleutians: 1) the Delarof Islands, and 2) Kiska Island and the Rat Islands, with abundance estimated at approximately 90 whales (Wade and Durban, unpublished data). A population of this size could easily cause the decline or prevent the recovery of Steller sea lions in this region if sea lions were their primary prey. The only killer whale predation events observed during NOAA Fisheries surveys in the central and western Aleutians have been of a Dall’s porpoise and a Cuvier’s beaked whale (Wade, unpublished data). Additionally, Estes et al. (1998) described predation on sea otters in the central Aleutians.

To try to determine which of these foraging hypotheses (squid or Steller sea lions) is correct, Paul Wade (Alaska Fisheries Science Center), John Durban (Southwest Fisheries Science Center), and Russ Andrews (University of Alaska Fairbanks/Alaska SeaLife Center) received funding from the Pollock Cooperative Conservation Research Center to deploy dive tags on Bigg’s killer whales in the central and western Aleutians to see if the whales exhibited the repetitive deep-diving behavior seen in other species that forage on squid, such as sperm whales. In June-July 2015, Wade and Durban piggy-backed on NMML’s Steller sea lion research cruise in the central and western Aleutians (led by Chief Scientist Tom Gelatt) and deployed three tags on Bigg’s killer whales: two tags were deployed in the Rat Islands and one was deployed in the Delarof Islands (the two known hot-spots for Bigg’s killer whales in the central and western Aleutians). The tags were Mk10-A satellite-linked depth tags (Wildlife Computers) incorporated into the LIMPET (Low Impact Minimally Percutaneous External-electronics Transmitter) configuration (Andrews et al. 2010).

A group of 12 Bigg’s killer whales was detected on 25 June in Rat Island Pass (just east of Kiska Island). The whales, in two clear subgroups, were on the site of a presumed kill of an unidentified marine mammal (there was a small oil slick, many birds feeding on visible prey remains in the water, the whales appeared to be feeding, and a prey sample was collected for genetic analysis to identify the species). Tags were deployed on one whale from each subgroup. The first whale tagged (PTT 102223) was identified as WT318 (an adult female); this whale was previously seen in 2006 in Rat Island Pass. The second whale tagged (PTT 102224) was identified as WT313 (another adult female). This whale was previously seen twice in 2006 in Rat Island Pass (one time with WT318, one time without). Given that the two whales were in different subgroups, they were expected to travel separately, and this was the case.

The deployment of the tag on WT313 was low (at the base of the dorsal fin) so, as expected, it did not provide a lot of location or dive data, but it did provide some interesting information. Over 6 days (25 June to 1 July), WT313 started in Rat Island Pass (where tagged), moved towards the southern end of Kiska Island, and then spent the next 5 days around Kiska (Fig. 1). This whale spent a lot of time close to shore, apparently foraging near the Sobaka, Lief, or Cape St. Stevens Steller sea lion rookeries on five occasions over the 5 days. The dive data indicated the whale was staying near the surface most of this time, but on one occasion it made a few repeated dives to approximately 350 m when it was about 20 km west of Kiska in deeper water.

The tag on WT318 provided a lot of high-quality locations and dive data for about 1 month (25 June to 23 July). At first, WT318 spent several days in and around Rat Island Pass (including around the Ayugadak Steller sea lion rookery) and then moved briefly down to the northeast tip of Amchitka (Fig. 2). Then the whale made a loop around Semisopochnoi Island, came back to Rat Island Pass, and headed west past the north end of Kiska, continuing west to Buldir Island, and then on to near Shemya in the Near Islands. The whale then returned on a more southerly route, spending time on some shallower banks, until returning all the way to Rat Island Pass. WT318 spent part of nearly every day in bouts of deeper dives (to ~200-500 m, on 10 out of the first 13 days). No deep diving occurred on several days when the whale moved relatively rapidly all the way out to Shemya and back. The tag started “duty cycling” after 13 July (as scheduled to save battery life) and then only turned on every fifth day. On 13 July, WT318 was back in Rat Island Pass, on 18 July it had moved back west to northwest of Attu Island and was half way to the Commander Islands in Russia (approximately 600 km from its tagging location), and on 23 July (the last transmission day) it was moving east again between Buldir and Kiska.

On 27 June a group of four Bigg’s killer whales was detected within a few hundred meters of the Steller sea lion rookery at Tag Island in the Delarof Islands, and a tag was deployed on a sub-adult male in the group (none of the whales had previously been identified). The tag worked until 13 July (17 days) and provided extensive location and diving data. This whale stayed within a 60 by 80 km area in the Delarof Islands, extending over to the western side of Tanaga Island (Fig. 3), and showed an interesting daily pattern. On the majority of the days, the whale was close to shore in the morning near either the Tag Island Steller sea lion rookery (where it was tagged) or the Gramp Island Steller sea lion rookery (about 20 km southwest of Tag Island), then it moved to deeper water in the afternoon, evening, and night time, usually in the wide channel between Gareloi and Ogliuga Islands over the head of a submarine canyon (an extension of Tanaga Canyon, the same area where two whales tagged in 2010 stayed for a month). This suggests a pattern of hunting for sea lions in the morning and perhaps hunting for squid in the evening. The whale’s dive pattern showed mostly surface behavior in the morning (when hunting sea lions) and then switched to repeated dives to ~300 m in the afternoon and evening. As the night progressed, the dives shoaled to about 220-250 m, suggesting the prey were moving up to shallower depths during the night. This whale also made two trips during this period to the west coast of Tanaga Island and spent time close to shore in the vicinity of several harbor seal haulouts.

In summary, two of the Bigg’s killer whales showed repetitive diving to depths of 200-300 m, consistent with foraging on squid. The third whale did not provide much dive data, but it did show one bout of repeated dives to 350 m, so all three whales showed some evidence of deep-diving behavior. Additionally, two of the whales also spent considerable time foraging around Steller sea lion rookeries; in particular one of the whales regularly foraged nearly every morning around one of two Steller sea lion rookeries in the Delarof Islands. The third whale did not show as much clear foraging close to sea lion rookeries, although it did swim near sea lion rookeries at Semisopochnoi, Ayugada, and Buldir (twice) over a period of approximately 1 month.

In conclusion, it appears that both foraging hypotheses may be correct – at least some Bigg’s killer whales appear to forage extensively on both Steller sea lions and squid in the central and western Aleutian Islands. What was most intriguing was to see one individual whale apparently switch between these two foraging strategies on a daily basis, hunting Steller sea lions in the morning and squid in the afternoon, evening, and night. This raises the possibility that Steller sea lions in the western and central Aleutians have fallen into a “predator pit”, meaning there is possibly enough predation from killer whales to prevent the sea lion population from recovering to higher levels, as the predator population may be sustained at relatively high levels due to the availability of squid.