If you’re a river fisherman, it’s said that a steelhead is the fish of 10,000 casts. The same holds true for lake fishermen targeting tiger muskie. A tiger muskie is a sterile hybrid cross between a Northern pike and a muskelunge. The Department of Fish and Wildlife has stocked seven lakes in Washington State with tiger muskie to thin out over populations

of pike minnow, sucker, perch and sunfish. Unlike most fish, tigers aggressively stalk their prey in weed choked lakes and reservoirs. Fishing for tiger muskie is all catch and release but fish 50 inches or more in length can be retained.

“The sun was going down, my casting arm was tiring from what felt like 10,000 casts.” 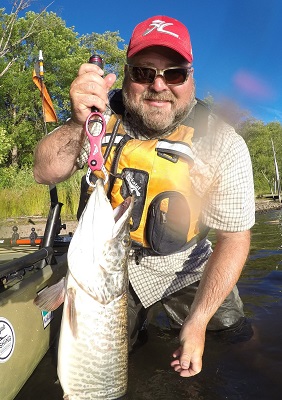 Two years ago, I started researching this relatively secretive fishery and was surprised at what little information was out there. It’s like Fight Club … no one talks about it. Online I befriended a midwestern transplant and muskie fisherman who was kind enough to share a few fishing techniques with me. Perhaps he thought I posed no threat to catching one from my kayak.

What concerned me most? How I was going to land one of these fish with teeth like a barracuda and large treble hooks that could potentially stick me. A fish grip, long pliers, wire cutters and a large landing net would become my best friends if given the opportunity to land one of these beasts. Because live bait wasn’t legally an option, part of my planning involved purchasing several

5- to 8-inch plugs, diving crank baits and spinners. Local tackle shops didn’t stock this type of gear. I ordered most from eBay or from tackle shops in the midwest.

Mayfield Lake is a 2.5-hour drive from Seattle and offers camping close to the lake. I picked a calm, windless day having heard that you could often see large fish basking in the sun in the shallows. My friend assured me those fish would see me and were highly unlikely to bite. Still, the chance of sneaking up on these trophy fish while standing in my Hobie® Mirage® Pro Angler was appealing. 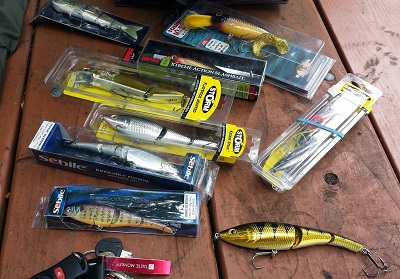 I fished long and hard that day working the edges of weed beds and drop offs where I was seeing those basking fish retreat. My adrenaline spiked on a few occasions when trophy class fish slowly followed my oversized plug to the kayak, only to turn away and flee at the last minute.

The sun was going down, my casting arm was tiring from what felt like 10,000 casts. I switched gear to an 8-inch perch colored diving plug with a rubber tail and decided to troll the weed line on the way back to my campsite. I set the line out about 20 feet behind the kayak and the plug dove down another 5 feet down in the water. With a few kicks of my MirageDrive® and spinning rod in my hand, it was only a couple minutes before my line stopped with a sudden tug and I could hear the splash of a large fish behind me.

I turned the kayak towards the fish as he pulled drag from my reel. Another two aerial leaps and I made a last minute decision to drive my kayak into the beach and safely release her from shore. She thrashed the water when I put the fish grip on her lip. I safely removed the treble hook and grabbed a quick photo and measurement before watching her swim free. I was now a member of the 40 (inches) and over club. I’m glad I did it from a kayak.

Check back weekly for new videos and stories by the 2016 Hobie Fishing Top Guns.