Late winter is a time of transition for spring trout and the anglers who pursue them. Admittedly, figuring out productive patterns while shifting from ice fishing to open-water mode can be intimidating, but those who know where and how to tackle spring trout can enjoy some of the year’s best fishing.

“Rainbow trout are a great example,” says veteran trout guide Bernie Keefe. “They’re active, hungry and willing to bite.”
Keefe targets tributaries and lakes in the Colorado high country a short cast west of Denver, but his spring rainbow strategies produce results in systems across the continent.
One part of his game plan hinges on the spring spawning run. “Lake-run rainbows migrate into tributary streams, and resident river fish may also move upstream and even into smaller tributaries,” he explains. “They run up rivers and streams until they find suitable spawning sites, which usually offer the right mix of gravel and riffles.”
Keefe doesn’t disturb spawning fish, preferring to let them focus on their efforts to continue the species. Instead, he keys on areas just below spawning sites. “With a good pair of polarized glasses, you can often see the spots where trout have cleaned mud or silt off the gravel for their spawning beds,” he says. “When you spot a bedding area, watch for dark shadows moving around just downstream. These trout are feeding on eggs and ripe for the catching.”
Small, egg-imitating jigs like the Clam Caviar Drop Jig are a top pick for such situations. “Because you’re sight-fishing trout in shallow water, often only 10 feet away from the bank, swinging the bait gently out to the fish with a lob-style cast is key,” he adds.
To execute such maneuvers, he gears up with a medium-light power, 7-foot, moderately fast action Fenwick HMX spinning rod spooled with 6-pound-test Berkley 100% Fluorocarbon line. “A long rod allows you to swing the jig out for a quiet splashdown just upstream of the fish,” he says. “Let the jig fall to bottom, then, holding the rodtip high, bounce the jig downstream. When the jig stops or you feel a bite, set the hook.” 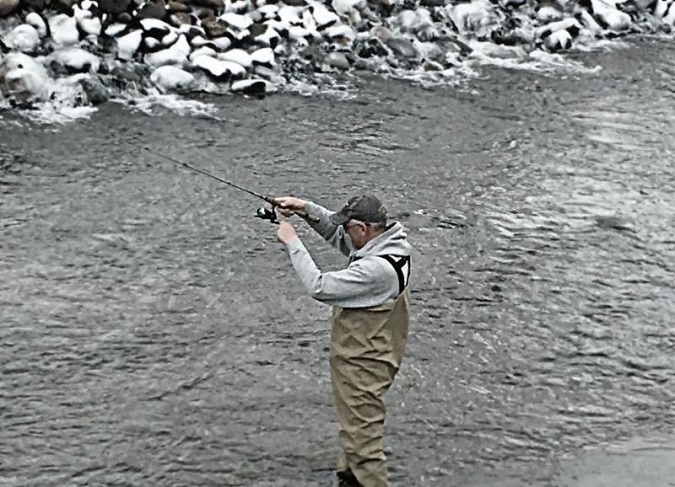 While the rainbow’s wariness is legendary, Keefe says the smorgasbord of eggs drifting down from the beds often overrides such caution. “There’s so much food coming down to the fish, they get so caught up in feeding you can often catch five or six fish from one spot,” he says.
Keefe also bounces egg-imitating jigs in deeper holes, where trout hold en route to feeding and spawning areas. “Doll flies, tubes and marabou jigs also work in the holes,” he adds. “These resting fish aren’t moving much, so methodically work each hole before pulling the plug on it. The good news is, if you get bit, chances are there’s more than one fish down there.”
To cap off a perfect day on the tributaries, Keefe often heads for the lake in late afternoon. “Whether the ice is off or just starting to pull away from the bank, shorecasting open water off points, along dark shorelines and near incoming streams is a great way to pick up a few more fish before calling it a day,” he says. “Low-light conditions toward evening are great, but the fish may bite all day long if it’s overcast. Small jerkbaits like Berkley Flicker Shads and Flicker Minnows work great.”
Keefe also throws 3- to 4-inch softbaits such as a Berkley Gulp! Jerk Shad or PowerBait Minnow on a 1/8- to 3/8-ounce jig head, directing long casts toward deep water offshore. “Let the jig fall to bottom and swim it back by raising your rodtip, then reeling in slack
as you lower the rod back toward the water,” he says.
Together with the tributary tactics, Keefe’s lakeshore tricks offer the means to enjoy great rainbow trout fishing during the dreaded seasonal transition as winter fades away. Use them to make this your best spring yet.
For more information or to book a trip with Keefe,
visit: fishingwithbernie.com or call (970) 531-2318.
print