It is Rocky Mountain Rifle Championship week at USA Shooting headquarters and if the last three Olympic quads tell us anything, it means someone competing at this event will go on to great Olympic success later this summer in Rio de Janeiro, Brazil. Competition in the five Olympic rifle disciplines starts Wednesday with Men’s and Women’s Air and Prone Rifle events.  The event concludes Sunday with the final shots of the Men’s & Women’s Air Rifle match.  With over 55 participants including competitors from six countries, the competition should be intense. 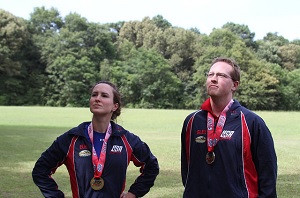 Ten USA Shooting National Championship medalists from 2015 are competing including all three in every event but Women’s Air Rifle with silver medalist Virginia Thrasher (Springfield, Virginia) absent due to her collegiate obligations as a freshman standout at West Virginia University.  Athletes will be using this match to help prepare for the start of the 2016 International Shooting Sport Federation (ISSF) World Cup season that kicks-off March 1 in Bangkok, Thailand.

International challengers have arrived in Colorado Springs ahead of the competition to get their Olympic prep started and to provide plenty of resistance for the U.S. team including Niccolo Campriani, Italy’s double medalist from London 2012.  Also competing is Valeria Sauveplane of France, a five-time World Cup medalist and two-time Olympian.  On the women’s side, Italy’s Petra Zublasing will be a force as the reigning Air Rifle World Champion and eight-time World Cup medalist.

Get a full schedule of events right here. Tune into live scoring beginning at 9am MT Wednesday by clicking here: results.megalink.no