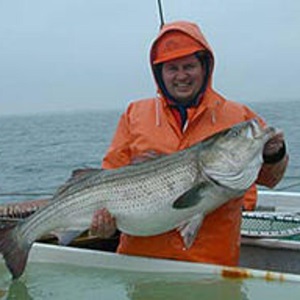 Free Lance-Star, in Fredericksburg reported first -AS ONE of the most important fisheries on the Atlantic coast, striped bass—or rockfish as they are also known—have been counted, studied and managed for decades. That history provides a wealth of data and knowledge on the state of the fishery’s health, and shapes the thinking on when harvesting adjustments need to be made.

The striped bass fishery is a major player in the Chesapeake Bay. The rockfish sits atop the Bay food chain, with menhaden being among its favorite menu choices.

In turn, rockfish is a favorite fish dish among humans, whether prepared at home or at a restaurant. Most non-commercially harvested striped bass are caught by recreational fishermen who simply love the sport and often return a catch to the water. Along with charter boat captains, these anglers are part of a key tourism industry for the Chesapeake Bay.

Since 2010, except for an upward spike in 2013, the overall striped bass population, including the number of larger egg-bearing females, has been dropping. That sends up a red flag for researchers, indicating that overfishing is taking a toll. Thanks to the data regulators have in hand, population trends can be tracked and acted upon as necessary.

The Virginia Marine Resources Commission serves as the state’s fisheries regulator. The evidence it sees suggests the time is right to implement a moratorium on this year’s recreational spring trophy striped bass season, which runs from May 15 to June 1, since the larger females are considered prime breeding stock.

During that two-week season, anglers are allowed to keep one striped bass at least 36 inches or longer per day. A ban would decrease that limit to zero. The taking of rockfish over 28 inches is strictly regulated throughout the year. Continue reading at this link.