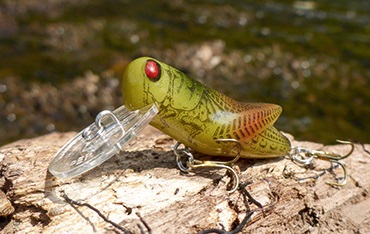 Fly fishermen know…………….. Whether to target trout, smallmouths, bluegills or largemouths, they turn to a lot of grasshopper-imitating fly patterns during late summer and continuing into fall. Grasshoppers and other terrestrial insects fairly commonly find themselves afloat this time of year, and fish that stay near stream edges or lake banks tend to start watching for these little treasures that just show up overhead, waiting to be eaten.

Spin-fishermen enjoy an advantage over the long-rod set because Rebel Crickhoppers not only offer the right profile to imitate a grasshopper or a cricket, but they can be worked on the surface to act like real ‘hoppers.

If you’ve ever witnessed a grasshopper landing in the water, you probably can picture what happens. If a fish doesn’t immediately annihilate the displaced insect, it will pause for a few seconds (sometimes several seconds), presumably to gain orientation, and then start swimming somewhat frantically, hopefully toward shore. After a few seconds it will pause and then start swimming again, and this pattern will continue until it gets eaten or finds refuge on dry land or a branch or rock. The same thing happens in a stream, except current might carry the insect downstream the whole time, whether it is swimming or holding still.

If you imitate this pattern with a Crickhopper or one its cousins in the right setting this time of year, chances are very good that you will bring some fish crashing to the surface. Ideal areas are stream runs beside grassy banks or beneath trees (which commonly drop beetles, locusts and other terrestrial insects), and the edges of ponds or coves off larger lakes. Not surprisingly, windy days tend to be extra good.

A couple of basic techniques work well for presenting a Crickhopper on top, but all should begin with a pronounced pause, and often a fish will hit before you add any action to the lure. That’s especially true in current, and if the current is significant, you’ll at least want to experiment with dead drifts, where you let the current do all the presentation work and only reel enough to take up spare line.

The two primary presentation techniques are waking and twitching. Waking simply means reeling slowly, with the rod tip high, so the bait wobbles steadily right at the surface and pushes out a wake. Twitching the rod tip makes a Crickhopper dance on the surface, making it look much more frantic.

Sometimes steady works best. Other times an erratic dance triggers more strikes. Often the best presentation combines the two and incorporates some pauses. Experiment, think back on what you had been doing any time a fish strikes, and try to determine if there’s a pattern.

The Crickhopper comes in four variations. The original Crickhopper is 1 ½ inches long. The Bighopper is slightly larger at 1 ¾ inches. A Micro Crickhopper is extra tiny at 1 ¼ inches, and has a single upturned barbless hook instead of being equipped with hanging trebles. The fourth version, a Crickhopper Popper, uses the same body as a Bighopper but has a popping cup face, so it is actually designed to be worked as a small popper.