In January 2019, an international team of scientists working off the tip of southern Chile got their first live look at what might be a new species of killer whale. Called Type D, the whales were previously known only from a beach stranding more than 60 years ago, fishermen’s stories, and tourist photographs.

Genetic samples the team collected will help determine whether this animal, with its distinctly different color pattern and body shape, is indeed new to science.

“We are very excited about the genetic analyses to come. Type D killer whales could be the largest undescribed animal left on the planet and a clear indication of how little we know about life in our oceans,” said Bob Pitman, a researcher from NOAA Fisheries’ Southwest Fisheries Science Center in La Jolla, California.

The team’s encounter with the distinctive whales came after they spent more than a week at anchor, waiting out the perpetual storms of Cape Horn off southern Chile. It was here that the scientists collected three biopsy samples—tiny bits of skin harmlessly taken from the whales with a crossbow dart—from a group of Type D killer whales.

Unraveling the secrets of these unique killer whales has now moved from the blustery Southern Ocean to the laboratory, where NOAA scientists will analyze DNA from the skin samples. “These samples hold the key to determining whether this form of killer whale represents a distinct species,” said Pitman.

The first record of the unusual killer whales came in 1955, when 17 animals stranded on the coast of Paraparaumu, New Zealand. Compared to other killer whales, they had more rounded heads, a narrower and more pointed dorsal fin, and a tiny white eyepatch; no whales like this had ever been described before.

Initially, scientists speculated that the unique look might have been a genetic aberration only seen in those stranded whales. Then, in 2005, a French scientist showed Pitman photographs of odd-looking killer whales that had taken fish from commercial fishing lines near Crozet Island in the southern Indian Ocean. They had the same tiny eye patches and bulbous heads.

The location, a quarter of the way around the world from New Zealand, suggested that relatives of the stranded whales might in fact be widespread.

Burgeoning tourism in Antarctica has since produced wildlife photographs in unprecedented quality and quantity. To monitor the distribution, movements, and abundance of killer whales in Antarctic waters, Pitman and colleagues, including members of the International Association of Antarctica Tour Operators, began to collect killer whale images from the Southern Ocean. 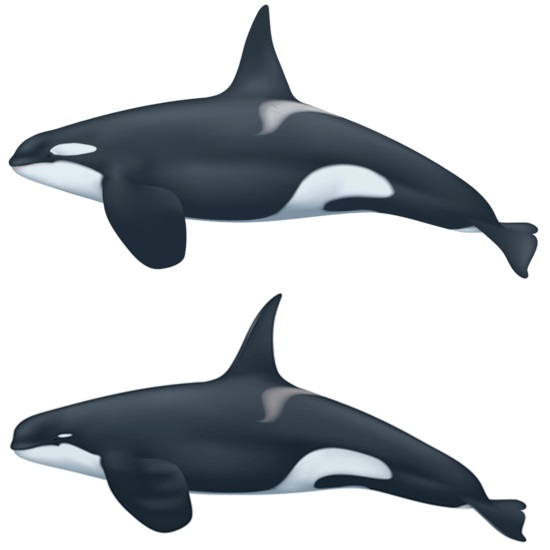 Among the tens of thousands of images compiled were six additional sightings of the unique whales. In 2010, Pitman and colleagues published a paper in the scientific journal Polar Biology describing the Type D killer whales. They included photos from each encounter and a map of the sighting locations.

The sightings indicated a distribution around the entire continent of Antarctica, but within subantarctic waters. Because Type D killer whales seemed to avoid the coldest waters, the authors suggested “subantarctic killer whale” as a common name. It was also evident from the few sighting records that this animal lived in offshore waters, in some of the most inhospitable latitudes on the planet: the Roaring 40s and the Furious 50s, known for their strong winds. No wonder it was almost unknown to science.

The stories continued: Chilean fishermen complained of killer whales stripping valuable toothfish off their lines, 60 to 80 miles south of Cape Horn, where the continental shelf drops off into the abyss. Based on photographs by fisheries observers, most of the fish-stealing killer whales were “regular” killer whales, but, among the images, there were also some groups of Type D whales.

The fishermen reported that the types did not mix and that the Type Ds stayed further from the boats when regular killer whales were around.

This year, the stories and photographs finally became real. With support from an anonymous donor through Cookson Adventures, and in collaboration with Centro de Conservación Cetácea, Chile, Pitman assembled an expedition of international whale experts: Bob Pitman and Lisa Ballance from the United States, John Totterdell and Rebecca Wellard from Australia, Jared Towers from Canada, and Mariano Sironi from Argentina. In January, they set sail from Ushuaia, Argentina, on the 22-meter research vessel Australis, to search for the elusive Type D killer whale.

At first, luck did not seem to favor the Australis team—at one point they sat at anchor for eight anxious days, pummeled by 40 to 60 knot winds at Cape Horn. Then, during a brief lull in the weather, Australis pounded its way back offshore when the team’s fortune changed.

They finally found the animals that Pitman had sought for 14 years.

The Australis spent three hours among a group of about 30 whales, which approached the vessel many times. When killer whale vocalization expert Rebecca Wellard towed a hydrophone behind the boat to record Type D calls, whales immediately came over to inspect it. From wide-angle cameras mounted on her hydrophone, she obtained revealing underwater images as the curious whales showed details of their unique color patterning and body shape.

The Type D killer whale images brought back by team Australis serve as a reminder of how little we know about life in our oceans. In the next few months, the DNA samples should finally reveal just how different the Type D is from other killer whales.