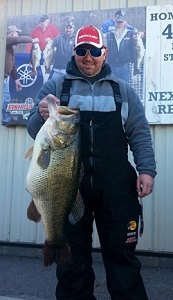 Story from the Activist Angler. Can Tennessee biologists turn Chickamauga into another Lake Fork?

That Texas lake is the gold standard for trophy bass fisheries, and duplicating the success there is not a reasonable expectation, especially for a state with a less hospitable climate. But resource managers are hopeful that they can grow bigger bass in Chickamauga through the introduction of Florida-strain largemouths into the population.

“I’m convinced that Florida bass will grow big in Tennessee,” says Bobby Wilson, assistant director of the Tennessee Wildlife Resources Agency. “I hope that can happen in Chickamauga. And, if it does, we’ll move to other lakes with it.”

So far, Wilson has two very persuasive pieces of evidence to support his conviction: In October of 2009, biologists electroshocked a 16-15 largemouth at Browns Creek Lake, where Floridas also have been stocked. And in 2015, Gabe Keen caught a 15.2 in Chickamauga, good enough to establish a new state record.

“We’ve had a few 13-pounders reported by fishermen (from agency lakes),” Wilson adds. “They probably were Florida bass.”

But the verdict still is out on Chickamauga.

The same goes for Lake Guntersville, just to the south in Alabama.

“We haven’t stocked them (Florida bass) on a regular basis,” said Keith Floyd, a fisheries supervisor for the Alabama Department of Conservation and Natural Resources. “It’s been periodically in one or two embayments, to see if we can incorporate Florida genomes into the population.”

Tennessee, however, has been much more deliberate in its approach. After stocking 200,000 fry annually for five years throughout Chickamauga failed to show much of a genetic shift, biologists decided to focus on three creeks for the next five.

“Anglers (at Chickamauga) are saying they are catching bigger bass,” Wilson explains. “And they say that the bass look different from what they are used to seeing.”

Anglers also are catching bigger bass at Lake Atkins in adjacent Arkansas, where the fishery was rehabilitated and then stocked with Floridas. In 2011, anglers caught at least three 12-pound bass in that 752-acre fishery.

Wilson says that his state used criteria from Arkansas and Oklahoma in deciding where Florida-strain bass could be stocked successfully in Tennessee. That turned out to be south of a line from Dyersburg in the west to Chattanooga in the east.

“A lot of people are excited about this,” Wilson says about Tennessee’s Florida bass program. “But some don’t want them because they have heard that they are finicky than northern bass.”

And there’s the argument that native bass populations are weakened when Florida bass are added.  “But these aren’t native systems,” the Tennessee fisheries chief points out. “These are manmade impoundments.”

Texas’ long-term success with Florida bass in Lake Fork and other reservoirs provides a strong argument in support of Wilson. And the fact that more than 500 largemouth bass of 13 pounds and more have been entered in its Sharelunker program seems to dispel the “finicky” fear as well.

From my own decades of experience with Florida bass in Florida, Texas, and Mexico, I’ve noted that they can turn off when temperature drops just a degree or two. But I do not believe them more difficult to catch than northern bass. When cold and/or high pressure turns them off, you just have to slow down and adjust your tactics. Instead of throwing a spinnerbait, flip a soft plastic along the edge of a weedline.

Also, I’ve found Florida bass to be, pound for pound, much more challenging fighters than northern bass. A big Florida is like a mean smallmouth with a belly. And I’ve seen 12-pounders tail walk.

Count me as one who is not troubled by the occasional finickiness of Florida bass or the fact that they are being introduced into manmade fisheries in Tennessee, Arkansas, Alabama, and perhaps other states outside their native range. I’ve been blessed to catch a few double-digit Floridas, and I’d like to see more opportunities for other anglers to do so as well.

Whether Chickamauga and Guntersville are two of the fisheries capable of growing those genetically enhanced big fish likely will be revealed in the years ahead.