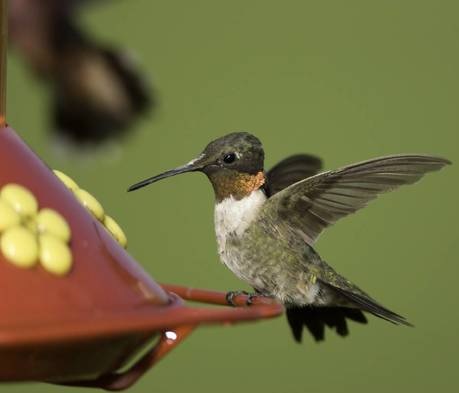 The ruby-throated hummingbird, the tiniest bird to nest in the Show-Me State, is a harbinger of spring. The Missouri Department of Conservation urges the public to learn more about these long-distance fliers as they begin to arrive during their spring migration.

“It’s time to put out feeders! Hummingbirds will be here soon and their numbers will ramp up in the next few weeks,” said MDC State Ornithologist Sarah Kendrick. “They have already been spotted in northern Arkansas and Tennessee.”

The diet of a hummingbird consists of flower nectar, tree sap, and even small insects. Kendrick reminds Missourians who want to feed the small fliers that their sugar water does not need to be colored red. Kendrick explained they will find the feeders, which are usually red, and drink the sugar water without the coloring.

To make your own sugar water, mix one part sugar with four parts water and bring to a boil until dissolved. Cool the mixture before filling the feeder and replace sugar water before it gets cloudy. Any extra sugar water can be stored in the refrigerator.

Ruby-throated hummingbirds spend the winter in Mexico and Central America and start their spring migration north as early as March. To track their migration and report your hummingbird sightings, Kendrick recommends visiting Journey North at http://tinyurl.com/yxopqgpt or eBird at http://tinyurl.com/y4tnezh8. These real-time sites show where the birds have been seen this year as they make their way back to the U.S. and Canada.

“These tiny birds are truly awesome. During migration, many fly non-stop over the Gulf of Mexico from the Yucatan Peninsula to the Gulf Coast of the U.S. – and then they do it again in the fall,” Kendrick said. “They can lose up to half their body weight during this non-stop flight.”

Hummingbirds are not only mesmerizing to watch, averaging 55 wing strokes per second, but they also play an important role in the ecosystem.

“Hummingbirds are important pollinators for many plants that require a long-billed pollinator and they eat lots of insects,” Kendrick noted. “And because of their small size, hummingbirds can end up as food for predators, such as large insects, frogs, and other birds.

Kendrick said growing native plants is a great way to help hummingbirds and other migratory birds.

“Native plants attract the most insects, which are a vital food source for breeding birds and their nestlings. Great natives for hummingbirds are cardinal flower, jewelweed, and trumpet creeper. Visit grownative.org to find a retailer!”

DID YOU KNOW: The male ruby-throated hummingbird has a striking red throat called a gorget, but the female does not. These speedy birds often hover, but can also fly upside down and backwards. They have very short legs, so they can hardly walk. To learn more about these acrobatic flyers, visit MDC’s online Field Guide at nature.mdc.mo.gov/discover-nature/field-guide/ruby-throated-hummingbird.