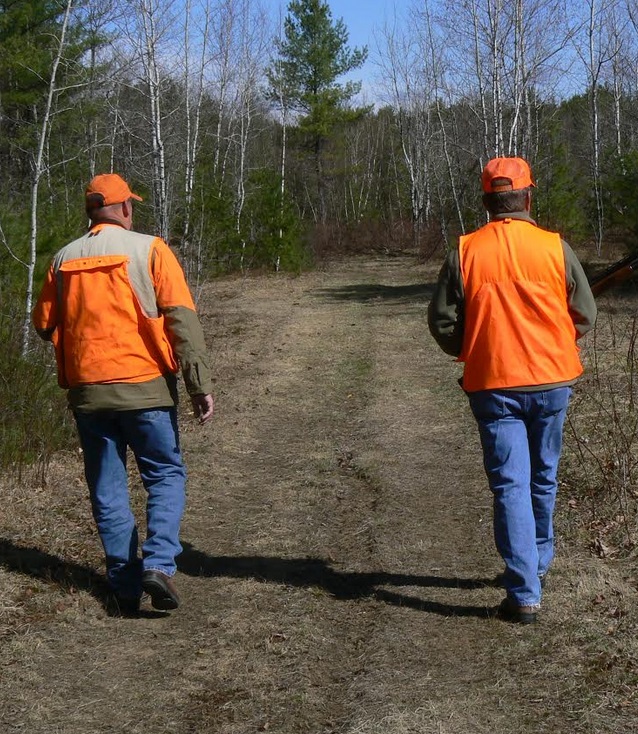 I remember when I started hunting Roughed grouse (or partridge as we call it around here) and woodcock.  It was about 46 years ago, when I was about 12 years old. October often found me coming home from school, grabbing my shotgun and heading out into the woods around my home.  That was a time when it was not uncommon for teens, and in my case, pre-teens, to have a firearm, all in an effort to help put food on the table.

I used a Stevens bolt-action .410 shotgun, a handful of shells and I didn’t have a dog (not one that hunted anyway).  I learned to make the first count shot. It was either a hit or a miss. A bolt-action shotgun is like using a single shot.  With a bolt-action there is no follow up.

I learned how to read the woods; where woodcock would be found and how resident birds differ from migrant birds. I also noted how they acted when they flushed and more importantly when they flushed and when they didn’t.  Woodcock don’t always flush, not when you think they should anyway. There are many times when they will hold tight, whether you are using a dog or not. These are some of the things I learned as a kid. Taking these lessons I was successful at putting woodcock in the pot.

As I grew older I fell into the trap of believing that you “must” have a dog and you “need” a better shotgun to be successful.  I must admit that the number of birds I took increased with these “improvements”. Another thing that happened was that I got lazy.  I ended up relying strictly upon the dog instead of my own instincts and the lessons I had learned over the years. I noticed that sometimes I relied too much on having that follow-up shot, whether I was using a pump or a double, instead of making that first shot count.  While the thrill was still there, there was something missing; the challenge. Don’t get me wrong, woodcock hunting is always challenging. I have hunted over many fine dogs and enjoy watching them work, but for me there was a disconnect.

One of my best friends was a man named Jack Hanley.  Jack had some of the best English setters around and we spent many hours chasing woodcock around in woods of New Hampshire.  Jack loved nothing better than hunting over a good dog. When Jack passed away hunting over a dog just wasn’t the same for me.  I decided to step back, get back to the basics and hunt like I did as a kid; without a dog. I proved to myself once again that not only can it be done, but also you can be successful doing it.

Knowledge is power and the more that you know the better you will be.  This is true whether you are woodcock hunting or playing football. It is not enough to just understand the basics, though that is a great place to start.  You have to have a full understanding of what you are going after, in this case woodcock. Like with deer hunting, time in the woods is the best teacher. Walk the fields and forest edges in the spring, just around first snow melt.  Depending on where you are March and April are the times when the woodcock start breeding. Find the breeding areas now and store that info away for the fall. Breeding birds are resident birds and they will not move too far away until they start getting pressure or the urge to migrate hits them.

Talk to farmers and other landowners to get their ideas and also ask for permission to hunt on their land.  Talk to other hunters to see what they are finding. Talk to local fish and game officers and biologists to get their take on things.  In other words, don’t go it alone and draw upon all of your resources.

Read about woodcock.  There are many fine articles written about hunting these birds.  I tend to stay away from the articles where the story is “all about me and how great a hunter I am”.  Most of the articles are not like this and hold valuable lessons that you may be able to apply to your hunting.

So what is a woodcock?

The woodcock is a small bird that is closely related to snipe and other members of the sandpiper family.  According to biologists at Vermont Fish and Wildlife, male woodcock generally weigh in the five ounce range while females weigh about seven ounces.  Woodcock are migratory birds meaning that they will fly south when the weather turns cold. There are two separate groups of woodcock, resident birds that breed right here in the northern part of the country, and migratory birds that breed in Canada and move through on their way south in the fall.

One Shot; One Kill:

As a kid I learned very quickly to make my first shot count and it was a valuable lesson to learn.  I don’t care if your shotgun can hold five rounds or not because when you are hunting woodcock without a dog you’ll probably only get one shot.  Make sure you make that shot count. This takes plenty of practice and you will probably miss a great deal, but keep at it. During the off season I spend a lot of time at the sporting clays range.  I try to simulate the hunting situation as much as possible. I use the same gun, with the same choke, and the same ammunition that I will be using in the field. Though I mainly hunt with a pump shotgun that is capable of holding five rounds, I always keep the waterfowl plug in it, thus limiting me to a maximum for three rounds.  I keep three rounds in the gun at all times as I have learned over the years that where there is one woodcock there are probably more close-by. The extra rounds make it possible to take two birds from the same cover if the opportunity presents itself.

When it comes to shotguns and ammunition every hunter will have their favorite and I am no different.  Some like an over and under 20 gauge, with one barrel fitted with a skeet choke and the other with improved cylinder.  I use a 12 gauge pump action with either an improved or modified choke. The best advice that I can give any woodcock hunter is to use the gun and chokes that you feel the most comfortable and confident with.  When it comes to ammo, remember that woodcock are small birds. Shot size is very important. If you are shooting lead shot then I would recommend nothing larger the #8 shot though #9 is better if you can find it.  If you shoot non-toxic shot do not go any larger than #7.

So you’ve done your homework and you have spent time on the clays course.  You have found what you expect is a great woodcock spot. It is an open field surrounded by mixed groves of aspen and birch.  It just looks “birdie”. Now what?

Remember, you don’t have a dog.  This means all of your senses need to be in tune.  Obviously your nose is not as sensitive as a dogs’, so you need to rely upon your sight and hearing.  My wife always says, “Two sets of eyes are better than one”, and when it comes to hunting woodcock, she is right.  I always try to go out with one other hunter just in case I miss something, which I do often.

One such thing happened to me while hunting in northern New Hampshire with my friend Mark.  I was on point as we entered a thicket of alders. A big woodcock flushed right in front of me and I was able to bring it down.  Right after I shot another bird flushed behind and to the right of me. As it turned out Mark couldn’t get off a safe shot due to the thick alder growth.

Stick to working along the edges where open field meets clumps of alder, birch and other hardwoods.  Woodcock instinctively freeze at the first sign of danger, allowing their camouflage to protect them.  Walk slowly as you may or may not be able to see the bird and prepare for a quick shot when it does flush.

Woodcock are not strong fliers, but you must be prepared for erratic behavior.  The bird may flush straight up or straight away; low and fast. In flight, woodcock will often fly in a zig-zag manner, darting like a fighter plane.  If you miss don’t despair as the bird will not fly far and there will be other chances. Mark the spot where the bird went down. Allow it to rest and become content and then work through the area again.  I like to go back to those birds on my way back to my truck if I haven’t gotten my limit in the meantime.

Hunting woodcock without the aid of a good dog can be both rewarding and frustrating.  While a dog can help you put more birds in the bag, hunting without one forces you to rely entirely upon your own abilities.  You are forced to slow down and take in everything around you. It forces you to think. It challenges you. It makes you a better hunter, shooter and outdoorsperson.  Don’t let anyone tell you that it can’t be done, because it can.