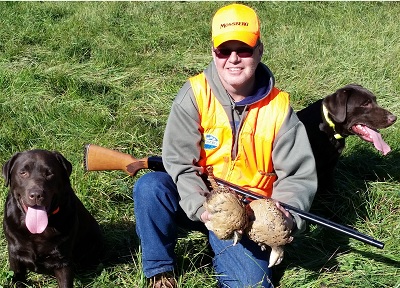 It is the first of September, the beginning of hunting season in New Hampshire and I find myself in Quebec, Canada.  I’m not hunting or fishing, instead I am here for my wife’s family reunion.  She makes sacrifices for me all year long, so I can do this without too much grumbling, though I would much rather be home hunting.

September 1st marks the beginning of hunting season in New Hampshire and Vermont and I have licenses for both states.  It is now time for all those people bragging about splitting playing cards or shooting squirrels at feeders to step up to the plate.  I unfortunately can’t afford wasting ammo on splitting cards and besides, I can’t eat playing cards.  I don’t base my abilities on how many cards I kill; I base my success on whether my family eats or not.  I know a lot of shooters who can shoot the heck out of sporting clays, but can’t hit a bird in flight to save their soul, or people who shoot the center out of a target, but can’t finish the deal in the field.  There is a great deal more that goes into hunting than just putting a round down range.

This is not to say that practice is not important, or needed, because it is.  In fact, I practice as much as possible, but I am not going to waste valuable ammunition on trick shots.  I take three rounds to sight in my Henry .30-30 and then put a few more rounds down range just to make sure.  That is it.  The same goes for my Marlin 60 .22LR.  If the gods are on my side and everything comes together, then there will be meat in the freezer.

The early bear season starts on September 1st, as does squirrel season.  It is also the start of the resident Canada goose season.  Though a bear would be nice, and would put a big dent in my freezer, the liberal bag limit on these resident geese, in both Vermont and New Hampshire, gives me a better chance of doing so.  For that reason I concentrate on the geese.  Less energy wasted for greater reward.  It worked for my Native American ancestors and it works for me.

For geese I’m using my Mossberg 500, 12 gauge pump fitted with a modified choke.  My shells consist of three inch Federal BlackCloud FS Steel in BB shot.  If squirrels are the name of the game I will use my Marlin 60 .22LR loaded with CCI Copper-22.  If I have a chance to go for bear hen I will be carrying my Henry .30-30 loaded with Federal Fusion 170 grain rounds.

It is time to break the guns out of the cabinet and head to the range to sight them in.  September is here and that means hunting season.  Just think, October is right around the corner and that is when the fun really begins.