Use the best gas and change out your Yamaha fuel filters on a regular basis: It’s really nice to see gasoline prices dropping, as fuel prices are usually one of the largest expenses when fishing or boating. If you don’t run some of the better quality fuels, this is a good time to get in the habit of improving the quality of the fuel you put into your boat’s gas tank without feeling that initial crunch from the costs associated with a better fuel product.

Given the choice, I run ethanol free gas in my boat.  It’s more expensive, but it means that I don’t have the issues commonly attributed to ethanol, like water in my gas.

All the newer Yamaha outboards and their components have been designed to withstand the corrosive properties of ethanol fuels, so if you can’t find an ethanol–free gas pump in your area or you prefer to run the E10 gasoline, I suggest you run the manufacturer’s stated octane fuel, and also subscribe to the major brand-name fuel suppliers that add detergents and lubricants like Techroline to their fuels. It might be cheaper to buy fuel from an off brand company, but the additives the major companies put in their fuels help clean the carbon and other debris out of your internal motor components and lubricate them, so for a few pennies more your adding potential longevity to your outboard.

You also want to patronize the busier gas stations that go through a lot of fuel and don’t hold it for longer periods where the ethanol in the fuel can attract water. Most of the debris introduced into your fuel system comes from the holding tanks in the gas stations, which over time break down, leak or corrode and eventually build up in the holding tanks allowing you to pump the debris directly into the fuel tank in your boat. The busier stations go through a lot of fuel, meaning debris and water don’t have time or opportunity to build up in their holding tanks.

All that being said, most of the gas you find on the road is E10 or ten percent ethanol, which besides being a fuel component is a very powerful solvent that can corrode rubber or fiberglass and loosen any debris that comes in with your fuel, all of which can lead to a clogged fuel line. If you have an older boat with a fiberglass gas tank, the ethanol can break down the fiberglass and matting and even eat a hole in the tank. Ethanol also attracts water, which is one of the most common issues you’ll run into with E10 gas products. 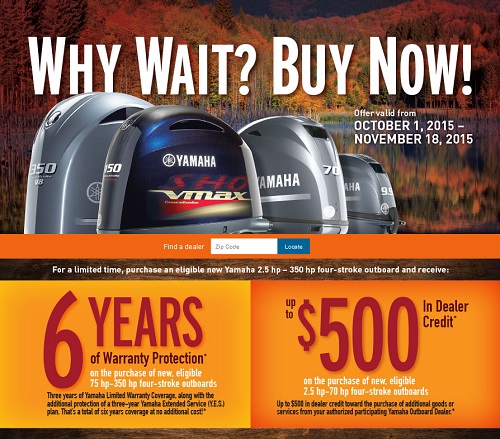 Yamaha also makes some fuel additives that you should put in your fuel when you fill up that will clean and protect your engine from many of the issues associated with poor gas, water or debris. YamaLube® Fuel Stabilizer and Conditioner Plus should be added to your gas tank to protect against corrosion from water-related fuel issues. Yamalube Ring Free Plus helps protect the metal fuel system components from the issues with ethanol-based fuels along with preventing carbon build-up, one of the biggest issues with outboards over the long-term life of the motor. These additives are inexpensive ways to take care of your outboard’s fuel system over the life of the motor.

The thing you want to remember is that your fuel system is an essential component to a safe and fun day on the water, so remember to perform regular maintenance on it, use better grade fuels and Yamalube additives, and have a few back-up parts ready in case there’s an issue. It’s all part of maintaining your fuel system in good condition so that you can get the longest life out of your outboard motor while optimizing the outboard’s performance.