Drop shot rigging is a staple presentation of serious bass fans from coast to coast, but it remains a largely overlooked option for anglers pursuing other species of gamefish, including crappies. That’s unfortunate, because in the right situations, drop shotting can yield banner catches, and even out-fish textbook strategies. ( #crappie #fishing #gamefish ) 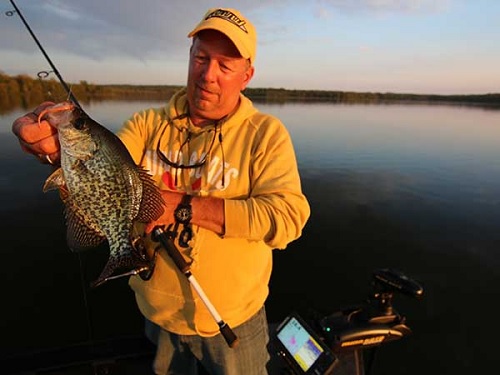 “Drop shotting is a great choice whenever the fish are relatively close to bottom and you want to cover water a little faster, or with more precision, than you can with slip bobbers or vertical jigging,” says veteran fishing guide and lifelong panfish fanatic Scott Glorvigen.

Case in point: the late-summer to early fall crappie migration.

“When crappies abandon withering shoreline weedbeds and head toward the main basin where they’ll spend the winter, they often follow bars and points that serve as travel corridors on their way out to deeper water,” he explains.

Drop shot rigs excel at presenting a tantalizing softbait or minnow at or just above the level of fish, and allow anglers to customize the speed of retrieve and amount of animation, without fear of the rig falling to bottom or drifting out of the strike zone.

“I was drop shotting bass with a 6-inch worm on a long finger bar leading from a shoreline saddle straight into the basin,” he recalls. “I was catching bass, but noticed on my sonar there were a lot of crappies and bluegills mixed in with them.”

Glorvigen credits the ultra-sensitive readings from his Lowrance Elite 9 CHIRP electronics for revealing the difference between bass and panfish.

“I was also catching the occasional crappie here and there, which told me that drop shotting might be a winning presentation in this scenario,” he adds.

To tempt more crappies into biting, he traded the bass-sized worm for a more panfish-appropriate, 3-inch Impulse Angleworm from Northland Fishing Tackle.

He also down-sized the business end of the setup to a size 4 VMC Spinshot Drop-Shot Hook. “The Spinshot hook is great for drop shotting because it spins around, allowing the bait to move freely, without causing line twist,” he says.

After threading on the worm so the tail remained free for maximum gyrations, he added a live crappie minnow for extra attraction.

“The plastic bait’s constant movement and water displacement makes it easy for crappies to find it, even in stained water, and the minnow is icing on the cake,” he explains. “Plus, if the minnow comes off halfway through the retrieve, I still have a chance to catch fish because the plastic is still in place.”

“The setup works great for crappies, and can still handle the occasional big bass that grabs the bait,” he says.

Leader length was tailored to how high crappies were above bottom. “On structure, the fish were close to bottom and an 18-inch leader worked the best,” he says. “But when they occasionally moved off to suspend over deeper water, leader lengths up to 36 inches produced fish.”

Glorvigen compulsively keeps sinker weight as light as possible when drop shotting panfish, and this was no exception. “It’s important to use the lightest weight you can get away with, so you can feel the fish but they can’t feel the sinker,” he explains.

Glorvigen says pencil-style weights ranging from 1/8- to 3/16-ounce were perfect in the 11- to 19-foot depths he was working.

Once rigged up, he’d cast out, let the sinker settle, and then tighten the line for a direct connection that allowed him to detect bottom as well as subtle bites.

“You can move the rig across by reeling, drifting or using your trolling motor to slowly cover key areas,” he notes.

No matter which means of propulsion you choose, Glorvigen recommends toning down the amount of action you give the bait.

“If the bait jumps around too fast, it’s hard for them to hit it,” he cautions. “I’ve had the best luck with a more subtle approach than what I’d use when bass fishing. Simply shaking and gently twitching the worm is enough. If you get too aggressive, the number of fish drops off dramatically.”

While the fall crappie transition is a great time to throw drop shot rigs, Glorvigen says there are plenty of other times it pays to keep an open mind on the water.

“Anglers get stuck in our ways and pigeonholed into certain presentations,” he says. “But it’s always good to experiment, adjust, and pay attention to what the fish are trying to tell you, all the way from early spring to last ice.”