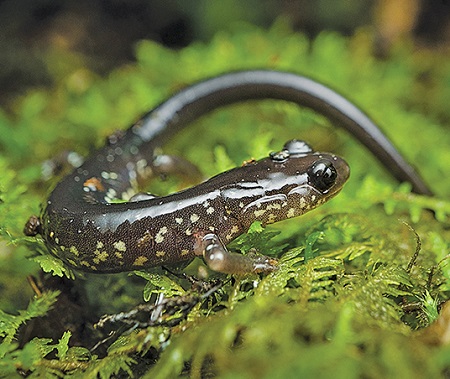 The little Cow Knob salamander, with its wide eyes and gentle grin, stared down a giant energy company and forced it to detour its proposed natural gas pipeline around the creature’s home turf in the Allegheny Mountains of Virginia.

But the shy amphibian with the Mona Lisa smile still faces an uncertain future from an even more relentless foe — climate change.

Named for a high point of Shenandoah Mountain in the George Washington National Forest where it was first seen in the 1960s, the Cow Knob salamander is so scarce that its habitat has been protected by a federal conservation agreement.

That pact, forged in 1994 between the U.S. Forest Service and the U.S. Fish and Wildlife Service, proved strong enough to turn aside the proposed Atlantic Coast Pipeline — something human opponents of the $5 billion project have yet to manage. To preclude listing the salamander under the federal Endangered Species Act, the agreement pledged to safeguard the animal’s limited home range.

Dominion Energy, based in Richmond, found out how firm that pledge was in 2016 when the Forest Service denied the company the right to run the pipeline through 5.5 miles of salamander habitat that lay smack in the middle of the 564-mile conduit proposed to funnel natural gas from West Virginia to southeastern Virginia and North Carolina. As a result, plans call for the pipeline to be rerouted around the salamander’s national forest habitat, adding 30 miles to the pipeline’s total length.

Dominion declines to say how much the detour has or will cost.

So, what is this animal that has caused all the fuss? “The Cow Knob salamander is unique to the Appalachian Mountains,” said Carol Croy, a wildlife biologist with the Forest Service, “and represents one of many rare and interesting species that make the Appalachians a recognized biodiversity hotspot, both in the Americas and throughout the world.”

Found in only a few counties in the George Washington National Forest on the Virginia/West Virginia line, the Cow Knob salamander (Plethodon punctatus) generally comes out of hiding and up to the forest floor at night during wet, rainy periods. Thus, it is very rarely encountered by outdoor enthusiasts, who might unknowingly tramp just above the salamander’s silent life in the underground.

With a black upper body shading down to a purplish belly, throat and toes, the salamander possesses the winsome smile that amphibian fans delight in. The “smile,” though, is involuntary, the function of its jawbone structure to harbor a plentiful assortment of teeth, all the better for tackling its sometimes crunchy, sometimes slippery, prey. The meaning of its Greek scientific name is literally “full of teeth.”

A high-elevation species, the largest populations are generally found on north-facing mountain slopes that are cooler, get more precipitation and are rocky and forested.

Like the other 448 species of the salamander family, plethodontids, Cow Knobs are “lungless,” able to breathe through their skin. And unlike others of their kind, which start life as underwater larvae, the Cow Knob salamander hatches fully formed, though in miniature, from eggs laid on land.

“They tend to spend a lot of time under the leaf surface,” Croy said, “underneath large rocks and in subterranean tunnels and burrows, hunting for small insects and invertebrates like millipedes and worms. Their year-round home ranges tend to be small, about 2,500 square feet, or about the size of an average house.”

The pipeline construction, with its forest clearing and heavy equipment, threatened to destroy or disrupt salamander habitat, which is why the Forest Service denied access there while permitting it through other parts of George Washington National Forest.

But for all of its tenacity in the face of a pipeline, the Cow Knob salamander may not be able to fend off the next threat.

While the historic conservation agreement between federal agencies has thus far kept the Cow Knob salamander from being listed under the Endangered Species Act, state authorities are anxious about its future.

John Kleopfer is a herpetologist with the Virginia Department of Game & Inland Fisheries. He said that like many range-restricted species, the Cow Knob salamander is susceptible to natural or manmade catastrophic events — wildfires, clear-cutting, pipelines. And like many high elevation species today, the Cow Knob salamander may simply not be able to climb out of range of a warming world.

“Many species of salamander are vulnerable to extinction,” Kleopfer said, “because they can’t adapt and move upward to more conducive habitat. They’re simply trapped on an ‘island in the sky.’ ”

Kleopfer said that he believes climate change is the single greatest long-term threat to these high elevation amphibians because they just don’t have the capability to move anywhere — there are no higher elevations to escape the heat.

According to the Virginia Herpetological Society, the Cow Knob salamander is classified under the Virginia Wildlife Action Plan as a “very high conservation need.” This means the species has a high risk of extinction, with populations “at very low levels, facing real threat(s), or occurring within a very limited distribution. Immediate management is needed for stabilization and recovery.”

Many factors are threatening the survival of amphibians globally; all are due to human actions. While global warming is rapidly decreasing the amount of viable habitat by pushing cool, moist environments higher up in elevation and latitude, the forests that help provide clean water and cool habitat for the Cow Knob and other salamanders also are at risk. The Eastern hemlock tree, for instance, is being wiped out across its range by an introduced insect, the woolly adelgid.

And then there’s the accelerating loss of forest canopy, especially oaks, from gypsy moth infestation.

With threats like these confronting a broad spectrum of salamanders and amphibians, one might wonder what difference it would make for a single species to disappear, especially one like the Cow Knob salamander with such limited range.

“It’s only recently that we have begun to have a better understanding of their role in maintaining forest health as both predators and prey,” Kleopfer said. They consume vast quantities of insects and other invertebrates and are important environmental indicators.

“Their secretive and often underground lifestyle makes them difficult to appreciate for many people,” Kleopfer acknowledged. “However, they are some of the most beautiful and interesting animals you will ever encounter, and they are part of what makes Virginia’s natural history so interesting.”

Kleopfer said he believes that what the future holds for many high-elevation species such as the Cow Knob salamander is likely a mixed bag: For some, impacts from climate change may be mitigated by increased cloud cover and rain from a warming climate, while for others their future is bleak.

“This is why this group of animals needs more attention and appreciation,” he said. “I would really hate to think of a world without salamanders.”