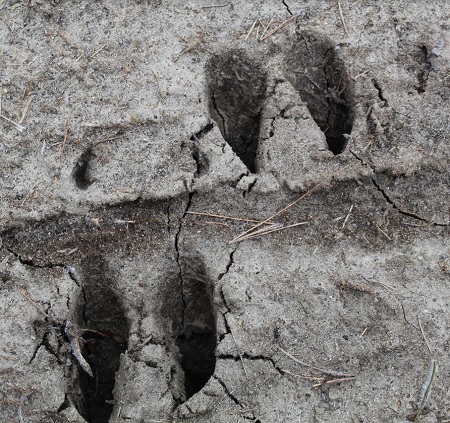 November 8th was the opening day of the New Hampshire firearms season for deer.  November 7th found me getting my gear together and going over my plans.  I decided to hunt a spot in Dunbarton, New Hampshire that on previous outings had given me good feelings.  The deer were there, I just had to find the right one.

My friend Stan, who also hunts both the archery and muzzleloader seasons, had hunted this spot earlier and had filled me in on what he found.  Since my last visit to this spot there had been some timber harvesting going on.  This bit of information told me a few things; first, precious pre-season scouting was now out the window.  The landscape had changed and the increased human activity would push the deer deeper.  While in the long run this clearing will have benefits for all sorts of wildlife and offer great hunting opportunities, for now it was going to be hit and miss. Second, the deer will more than likely stay in tight to the available cover, and at this location meant a thick, swampy area at the bottom of a ravine.  Third, when the deer do venture out they will probably use the logging roads left behind by the skidders.  Stan also told me that the afternoons seemed to produce the most deer activity.  Armed with this information I planned to head out at about 12:30pm.

The morning meant doing a last run through my gear.  Federal Fusion .30-30 rounds, check; Bushnell binoculars, check; first-aid kit, rope, water and The New Primal Meat sticks, check, check and check.  Noon found me grabbing my Henry .30-30 and loading my stuff into Stan’s vehicle.  In no time we were pulling out for the trip to Dunbarton.  Upon our arrival I quickly noticed the change caused by the logging.  I also noticed the tracks of a very large deer; a deer I would come to call “The Ghost”.

I spent the next three hours tracking this deer.  As I had expected, it was following the logging roads.  At times the tracks mixed with those of does and smaller bucks, but most of the time he was on his own.  I finally lost the trail when it entered into the thick, swampy area.  At about 3:30pm the coyotes started howling.  With that I left the woods and started the trek back to Stan’s vehicle.  When Stan got back to the vehicle he told me that he had four does near him, and though taking a doe was legal, he opted to wait to see if a buck came into view, which it didn’t.

Due to other commitments I was unable to get back out there until November 13th.  This time I was alone and decided to make it a morning hunt.  The ground was frozen and it was sleeting to beat the band.  Though it was difficult I was once again able to pick up a trail.  This deer was a creature of habit.  He was obviously moving during the cover of darkness.  He would make his circuit and then would head back into the deep cover.

Finding an area where three trails came together, I sat down and waited.  From this position I had a great view of the thick tangle that made up the swampy area.  The maximum distance would be about 70 yards, perfect for the Henry .30-30, which I had sighted in at 100 yards with open sights.  As I waited for this deer to make a mistake, the weather turned worse.  Over the years I have found that the deer in this neck of the woods will move in the cold and snow, a cold rain, sleet or hail will keep them hunkered down.  The cards were stacked against me and unless something pushed them, human or coyote, they weren’t going to come out.  I decided to wait it out as this was going to be my best bet for today.  As it turned out, nothing happened.  Even the squirrels were silent.  After four hours I decided to call it quits for this day.  I was cold, wet and hungry.  I had already eaten my meat snacks.  While my feet were warm due to my Smartwool socks, my hands were starting to get numb.  It was time to head home.  There was still time in this season and you know I’ll be back out there.

Some things are worth the wait and this big buck is one of those things.  I’m not ready to throw in the towel just yet.  The next time I get out there I will set up in the same spot.  Sooner or later this deer will make a mistake and I want to be there to take advantage of it.