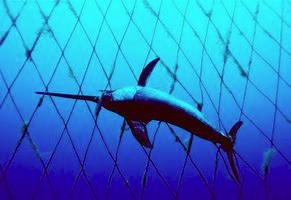 California Governor Jerry Brown signed a bill, SB1017, to end commercial drift gillnet fishing and encourage a transition to innovative, more sustainable fishing gear. His action aligns the California swordfish fishery with modern goals for bluewater fisheries, such as locally-supplied seafood, community-based employment and, in support of it all, maintaining abundant and sustainable fishery resources and a healthy environment.

“This action says loud and clear that it’s time to trade in outmoded, ecologically-harmful fishing gears for ones that sustain fishing while protecting the ocean environment,” said Theresa Labriola, Pacific Program director of Wild Oceans.

“Drift gillnets also trap 70 other species of ocean wildlife. For every fish kept, another is discarded. That is a senseless waste of our ocean resources,” said Bob Kurz, a trustee for the International Game Fish Association.

The California Department of Fish and Wildlife will establish a voluntary program to retire drift gillnet permit holders out of the fishery. Participants will receive $10,000 in exchange for a permit. The program will also pay each active commercial fisherman $100,000 to surrender their drift gillnets. The bill requires the Ocean Protection Council to use $1 million to fund the transition program. Private organizations have agreed to raise $1 million and the remaining permits will expire four years after the private money is raised.

“This hard-won victory was a long time coming. Finally, we have found a way to phase out the use of these deadly and destructive nets without harming the commercial fishing industry in the process. I am grateful to Governor Brown for signing it into law,” said Sen. Ben Allen (D-Santa Monica), who authored SB1017.

One such emerging, smarter fishing method is the use of buoy-gear, which commercial fishermen in Florida have used for over a decade to supply a high-value product with virtually no bycatch. Researchers and commercial fishermen have modified the gear for use in California. A multi-year project testing deep set buoy gear being conducted through an exempted fishing permit has found that more than 80 percent of the hookups are swordfish and only two percent is bycatch.

“The recreational fishing community is extremely grateful to Sen. Allen for leading this bipartisan effort and to Governor Brown for listening to the broad coalition united in a desire to transition the California swordfish fishery to more sustainable gears,” said Mike Leonard, the American Sportfishing Association’s Conservation director. “Governor Brown’s signing of SB1017 into law is a landmark moment for the future of healthy fisheries off the California coast.”