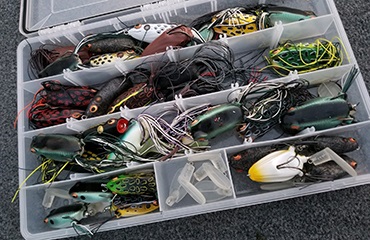 A recent trip to the Upper Mississippi River in Wisconsin gave Alabama bass pro Jimmy Mason a bit of a preview of some of the most exciting action that occurs on his home waters every year. Mason mostly fishes Alabama’s Tennessee River impoundments – Guntersville, Wheeler, Wilson and Pickwick – which serve up world-class frog fishing from very late in the summer through the end of the fall, and frog fishing was the main attraction when he was fishing the Mississippi.

The primary frog season on the Tennessee River is just getting going and will get better as summer gives way to fall. Some frog fish can be caught from hydrilla, milfoil and other grasses from the time the vegetation reaches the surface and begins to mat up late in the spring. However, the massive main-river mats that Guntersville is famous for get too thick to be good bass habitat fairly early in the summer. Eventually, the surface mats get so thick that they shade out the stems and start dying from the bottom, and that’s when the magic starts.

“Caverns of sorts form under those mats, and they offer ideal habitat for feeding bass,” Mason said, explaining that adjacent areas where the stems haven’t started dying form edges, which the fish relate to  in the same way they relate to river channel ledges earlier in the summer.

Once the mats start getting right, Mason always has at least a couple frog rods rigged with BOOYAH Pad Crashers, and on some fall days, he never picks up anything else. Beyond being the most efficient lures for finding and catching bass when they are under mats, Pad Crashers maximize the fun element. Little in bass fishing provides bigger excitement than having heavyweight bass come out of nowhere to bust through thick mats in full attack mode.

Mason’s go-to frog for fishing big open mats is an original BOOYAH Pad Crasher. He wants the full-sized Pad Crasher’s weight for long casts and for pushing down on mats to get fish’s attention and a pointed nose for moving cleanly through the matted vegetation. When in search mode, he fires off long casts and works the bait quickly, sometimes with constant rapid twitches; other times just winding. When he finds fish, he slows way down, both in terms of working an area with repeated casts and in retrieve variances.

Mason normally starts with Ole Smokey, which has a generally dark appearance but is a bit translucent. That is easily the color Mason fishes the most, but he’ll commonly have a few colors tied on, and he won’t be stubborn when the fish show a different preference any given day.

When fish roll on Masson’s Pad Crashers but won’t quite commit or when the bite just seems slow, he’ll often tie a Pad Crasher Jr. on a second rod and start mixing in casts with the smaller frog.

“At Guntersville, even the biggest fish sometimes prefer a smaller frog,” Mason said. “During the fall, especially, when a frog is the primary bait for a lot of fishermen, throwing that Pad Crasher Jr. is great for getting those fish that have just been showing themselves to commit.”

A Poppin’ Pad Crasher comes into play around more broken mats and along the edges of the surface vegetation.

“I really like the popping version for those areas where I otherwise would want to fish a Boss Pop, but there is a little too much grass for that,” Mason said.

He can cast the Poppin’ Pad Crasher just past a big gap in the vegetation, drag it across the grass and then work it as a popper in the open water. As with the Pad Crasher, Mason lets the bass dictate their size preference.

Mason uses a Toad Runner in similar areas if he wants a faster, steadier presentation, either to trigger strikes or to cover more water. Just as the Poppin’ Pad Crasher serves as his popper around matted grass and other grabby cover, a Toad Runner is his buzzbait for that situation.

Mason’s favorite frog rod is a Lew’s 7-2 heavy action Jig & Worm rod that has everything he likes. He can make longs casts, and it is light in the hand so he can fish a frog all day. It also has just enough tip flexibility to allow for good casting and for working a frog, but has plenty of backbone for setting hooks and getting fish out. He matches the rod with a wide-spool 7:1 baitcasting reel spooled with 50-pound braided line.

The bad news about mat fishing is that it can involve long periods with no bites. The good news is that the flurries of explosive action easily make up for the lulls once fish are found!

In unfamiliar water, especially on lakes like Guntersville that have mats that go on for miles, the best way to find the fish is to make a lot of long casts, keeping the boat and the frog moving.

“When I’m in full search mode, I’m not that worried about catching every fish. I’m trying to get a few to move and reveal themselves because they are often in big groups.

It’s not all blind casting and hoping, though. Certain clues give away mats that are more likely to produce.

At the top of that list is finding mats that are “cheesy,” as grass lakes specialists say. As the vegetation stems start dying beneath the surface, they break up and float to the top, and the tangle of defined stems gradually transitions into a slimier but more uniform thick surface mat, and bold greens give way to yellows and browns. Once transformed, the mat is hollow underneath and much more likely to hold bass, especially where there is an area of cheesy mat that’s surrounded by grass that hasn’t gotten there yet.

Other important clues are blow-up holes, where fish have attacked anglers’ baits or natural offerings, and wide paths, where fish have been dragged out. Often another angler will catch a bass and keep moving, leaving behind an obvious clue and a school of fish!

Veteran mat fishermen also listen for the “Rice Krispies” sound, which comes from bluegills and shad eating insects just under the grass. “Look and listen for life in the mat. That’s important,” Mason said.

As with most fishing, oddities can also be important and warrant attention. Points and indentions in the grass are normally based on changes in bottom contours and may also reveal current breaks. Changes in the grass type create different holding areas and at times, mixes of forage. Hard cover, like a downed tree and in the middle of otherwise uniform grass, often will hold fish. If it’s different, it probably deserves a cast or two.

In Part II of this series, we’ll explore frog applications away from mats. In Part III, we’ll reveal numerous tips that will help you catch more bass on frogs.