Greg Hackney of Gonzales, La., started the day in third place, but weighed in 17 pounds, 15 ounces on Championship Sunday to increase his four-day total to 66-2 at the GEICO Bassmaster BASSfest presented by Choctaw Casino and Resort at Lake Texoma. With his win, Hackney earned the $100,000 first-place prize and a berth in the 2017 GEICO Bassmaster Classic to be held in Houston, Texas.

Hackney’s final limit of bass helped him slip past Brandon Card of Caryville, Tenn., by a slim margin of 1-15.

Hackney, the 2014 Toyota Bassmaster Angler of the Year, knew he needed to have a solid day to contend for the win. As a result, he fished his spots in reverse order because the larger fish were biting later in day.

“The way the fishing had been all week, there was a good bite early in the morning, then it slowed during the middle of the day and picked up again in the afternoons,” Hackney said. “I knew I had to catch a big bag of fish today to have a shot at winning.” 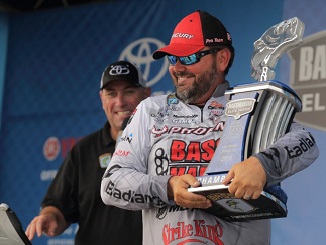 Hackney’s best locations were adjacent to the main river channel. He also caught a lot of fish on the inside turns of coves and the points that were created on the outside edges of those coves.

“Green, leafy bushes were key to finding bass,” he said. “The fish were holding tight to brushy cover, and it often took multiple flips to the same piece of structure to make one eat. When it was hot and sunny, it was a grind. But today with the cloud cover, I felt like the fishing was much better.”

Most of Hackney’s morning bass came on a 1-ounce Strike King Hack Attack jig with a black-and-blue trailer. He’d switch to a green pumpkin trailer during the afternoons.

“It was critical for me to raise and lower the jig vertically in the middle of the bushes,” he said. “Pulling bass out of that thick and nasty cover requires heavy tackle and durable line. I lost quite a few big fish that became tangled in the brush. Sometimes you have to wrestle them out of the cover, and you don’t always win.”

Card weighed the heaviest limit of the tournament on Championship Sunday with 21-2, which bumped his total weight to 64-3 for the week.

“I wasn’t on the pattern I caught my fish on this week until the final day of practice,” Card said. “I was actually targeting smallmouth on the lower end of the lake near the dam.

“With an hour of practice remaining, I drove up the lake and marked a bunch of great looking structure and returned to those spots during each day of the tournament. I’m sure glad I did.”

Card caught his fish flipping the flooded bushes with a jig and Texas rigged soft plastic during the first three days of the tournament. With the cloudy conditions Sunday, he knew there would be a quality topwater bite throughout the day.

“I caught most of my fish today on a buzzbait and a Yo-Zuri walking bait in a bone color pattern,” he said during Sunday’s final weigh-in. “My first stop of the morning, I caught two nice fish, which gave me the confidence to stick with the topwater pattern all day long. The fishing slowed down mid-morning, but the wind calmed down and I knew it was game on.”

Gerald Swindle of Warrior, Ala., finished in third place with a four-day total of 60-6 after bringing in only 12-1 on the final day of competition.

“I had a great tournament, and I’ve got nothing to complain about,” Swindle said. “I caught a lot of great fish, but I missed some key bites today and lost several fish that cost me a better finish. But that’s tournament fishing and a big part of why I love this sport.”

Hackney was awarded $1,000 for the leading the Toyota Bassmaster Angler of the Year points race at the end of the event.

Swindle earned the Power-Pole Captain’s Cash award of $1,000 for being the highest-placing angler who is registered and eligible and uses a client-approved product on his boat.

Hackney also earned the Livingston Lures Leader Award of $500 for leading on the second day.

The Phoenix Boats Big Bass Award of $1,500 was presented to Randall Tharp for weighing in the overall biggest bass of the event — a 7-6 bass caught on Friday.

Dick Cepek Rolling Forward Award of $1,000 will be presented to the angler who makes the largest gain in Toyota Angler of the Year points from tournament to tournament.