By Dana Benner. I am sitting and writing this piece after just coming home from deer hunting.  My gear is all put away and I am not happy.  I spend a great deal of time throughout the year scouting for good locations for turkey and deer and this place was looking pretty good with plenty of sign.  I had high hopes as I headed out, but it just wasn’t meant to be.

I had just arrived when I heard the shot.  At first I said to myself, “Well, someone just got their deer”, but then I realized that the shot I heard came from a rifle.  The area I was hunting was shotgun only.  I then told myself that it must have been someone using an inline muzzleloader.  When I heard multiple rifle shot in rapid succession I realized that this was not the place for me so I left.  Any deer in the area would be long gone.

I grew up in New Hampshire.  New Hampshire has been my home for over 50 years.  After doing 12 years in the military I came home to New Hampshire.  As a kid I spent endless hours in the woods and fields near our home.  I hunted and fished, sometimes bringing something home for the table, but more often than not I just learned those outdoor skills that would see me through my military years and the rest of my life.  Very often while hunting I would never run into another person.  Hunting was hunting and there were rules, both written and unwritten that everybody went by.  My, how things have changed. 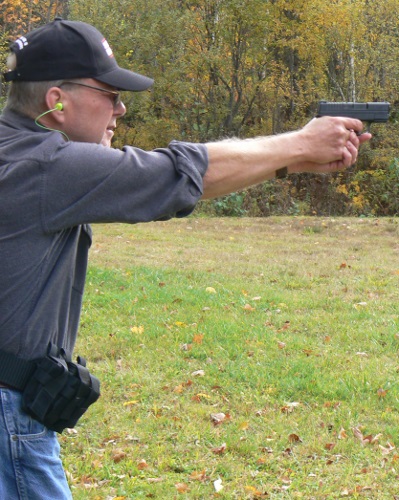 More and more of the land that I once hunted is now full of houses and shopping malls.  What is left is being posted at an alarming rate.  At first I got angry at the landowners, but after this season I can see why they do it.  There is no common courtesy in the woods any longer.  I spend as much time picking up spent brass and other trash as I do hunting.  The brass that I pick up is not just one or two here and there.  These are piles of it with the majority being handgun and .223.  This is not brass left behind from hunters, especially when most of the areas I hunt in the southern part of the state are shotgun only.  This trash is left behind by people just interested in shooting the place up and making it unsafe and giving the rest of us a bad name.  Don’t get me wrong, I support the 2nd Amendment and I own rifles and handguns myself, but I shoot them in a safe manner, at designated gun ranges, not out in the woods where you have no idea where that round is going.

This past fall turkey season my friend and I were hunting a great area.  We had scouted and there were turkeys everywhere.  We split up and headed to our spots.  Things were pretty quiet for about an hour and then all heck broke loose.  It started out with handguns then it sounded like WWIII broke out.  The sounds of semi-automatic fire surrounded like I was somewhere in Iraq as opposed to the woods of New Hampshire.  Whomever was shooting were close, real close, making it unsafe to be in the area so we packed up and left.

I used to love pheasant hunting here in New Hampshire.  I’ve always met some great people while in the field.  This year was the first time that I didn’t buy my pheasant stamp and I probably will never do so again.  Pheasant hunting here has become re-enactments of the O.K. Corral.  I’ve seen shooters (I can’t call them hunters) circle around a handful of pheasants and start shooting.  How anyone didn’t die is beyond me.  I’ve seen people shooting at birds on the ground and shooting them out of the trees.  I’ve seen them shooting in the direction of other hunters or too close to dogs in the field.  This is not hunting, it is killing.  There are no ethics anymore.  If some of these people took a hunter safety course it is obvious that they didn’t learn anything.

My hat goes off to all those Conservation officers out there that try their best to uphold the laws, but they are spread too thin.  They can’t be everywhere all of the time.  It is up to the rest of us to police our own, but I don’t see that happening any time soon.  I think that though I live in New Hampshire, this will be my last hunting license I will purchase here.  I don’t want to spend my days in the field wondering if I am going to get killed by some clown blowing off rounds in the woods or by some pheasant hunter so intent on killing something that they don’t pay attention to what or who is around them.

Maybe the New Hampshire Fish and Game Department should put more officers in the field.  Perhaps they should concentrate more on protecting our wildlife and our hunting/fishing heritage than on selling licenses.  Perhaps they should do away with pheasant hunting all together and concentrate on preserving upland hunting for grouse and woodcock like Vermont has done.  Perhaps if the non-resident license fees were raised we could keep some of the yahoos out.  New Hampshire has some of the lowest non-resident fees around.  Just take a look at the non-resident fees for Wyoming and Maine as examples.

Alas, we all know that will never happen because in our world today it is all about making a dollar.  I never will stop hunting unless I am not able to do it safely.  From now on I think I will do my hunting elsewhere.  Vermont is a great place and it is not too far away, but no matter where it is, it will be more than likely anywhere but New Hampshire.