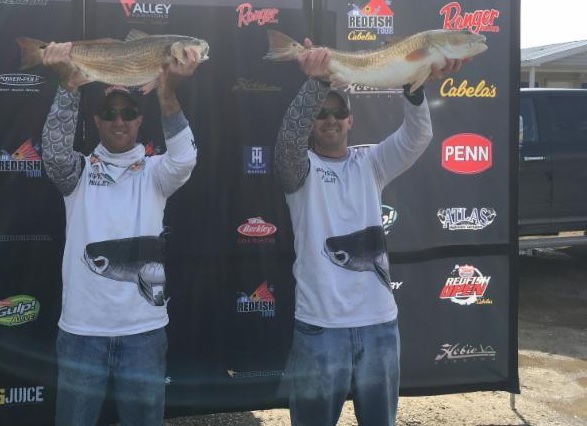 An early morning fog caused a delay in starting and made for a slow run to Venice.
“The fog shortened our time to fish and caused us to take two hours to get to our location,” said Gary Wilson. “When we arrived, our fish were there but wouldn’t bite. We didn’t catch both weigh fish until around noon.”
Dirty waters didn’t help the team either, but the combination of Berkley Gulp! shrimp under corks and PENN reels helped the team top the competition.
“We are super excited,” said Gary Wilson. “We have been fishing the IFA since inception with numerous top-10 finishes and we were finally able to put up a W.”
Along with the Ranger boat and Mercury package, the team took added $2,437 in Anglers Advantage cash for a total payout of $27,000.
Second-place finishers Jonathan Robin, of Luling, Louisiana, and Kenny Boudreaux, of Marrero, Louisiana, weighed a total of 17.07 pounds to take home a total of $3,635 in winnings.
The duo also experienced a slow start due to the early fog and reported an uptick on bites when the skies cleared.
“Once the fog lifted and the sun came out, the fish turned on,” said Robin. “We feel great. This is our first time fishing the IFA and really enjoyed it.”
Mark Naron, of Moss Point, Mississippi, and Neil Naron, of Lucedale, Mississippi, weighed 16.91 pounds to take third place. The anglers made the long and slow run to Venice in the morning fog. Although tough conditions hampered the bite, the team knew where the fish would be staged.
“We knew the fish were there after a good day of pre-fishing, on Friday” said Mark Naron. “So we stuck to it and got about a 20 to 30 minute break when the sun came out and was fortunate enough to get on our two best fish in that window.”
For their efforts, the team won a total of $2,097 in winnings.
Eleventh-place finishers Joseph Bazo and Elijah Bazo boated the heaviest redfish of the event and won the $500 Berkley Gulp! Big Redfish award. By catching their lunker on Berkley Gulp!, the team also received $250 in Berkley products.
The next stop for the IFA Redfish Tour is set for Port Aransas, on March 30. Teams that compete in at least two regular-season events will be qualified for the 2019 IFA Redfish Tour Championship.
IFA events are made possible through the sponsorship and continued support of these well-respected brands: Hobie Fishing, Ranger Boats, Bass Pro Shops, Cabela’s, Mercury Marine, Garmin, Berkley Gulp!, Berkley Gulp! Alive!, PENN Reels, Spiderwire, Navionics, Power-Pole, Valley Fashions,  T-H Marine, ATLAS, G-Juice, and Powertex Group.
For more information or to become a member of the IFA, visit www.ifatours.com.
IFA Redfish Tour – Louisiana Division
Lafitte, La. (Top 10)

The Texas Rig, Reimagined for Redfish